The SNAP 2015 result has been declared on Monday, January 11, 2016. As per the schedule mentioned at the official website, the score cards were to be available after 1 PM, however, the candidates could downloaded before the stipulated time.

The exam was conducted by Symbiosis International University on December 20, 2015. On the basis of the SNAP scores, admission to over 2000 seats offered by 14 B-schools under the university will take place. 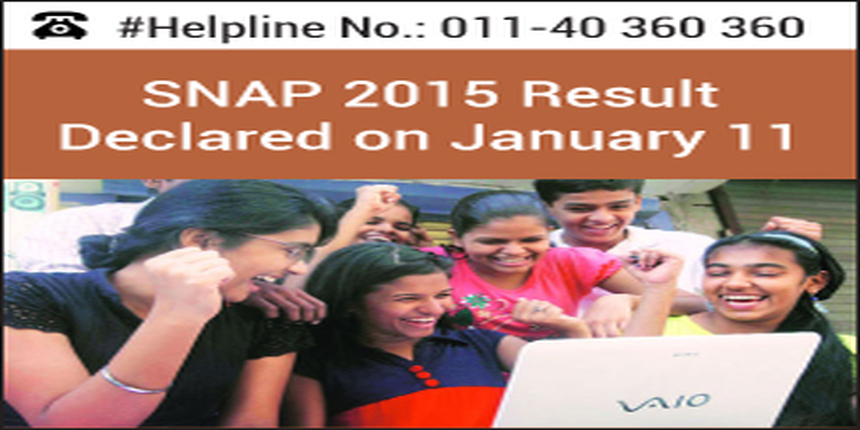 The SNAP 2015 Score Card will include the section wise and overall scores. The SNAP 2015 participating institutes will declare the shortlist of candidates on the basis of their cutoffs to appear for the Group Exercise and Personal Interaction will be announced in the 3rd week of January 2016.

The GE-PI rounds will take place in February 2016. The institutes will announce their merit lists between last week of February and March, 2016. The following table brings to you the parameters and weights for the final selection process:

SNAP was a paper pencil based test of 120 minutes and consisted of 4 sections. The total marks of the paper was 180.

Stay tuned to bschool.careers360.com for more news and updates on SNAP 2015.

SNAP Exam Centres 2020 - Check the complete list of cities for...

Here are some of the colleges for MBA takes admission without entrance exam:

Hope this helps, all the best.
Read More
Answer

What is the SNAP cut off for *mba in infrastructure management at SCMHRD*? Does SCMHRD acceot freshers for MBA in IM? (i am a civil engineering student)

Basic eligibility is just that you have to be graduated in any field either btech or any other course from a recognised university.

Hope this information is helpful.

Is there any entrance exam for symbiosis college of arts and commerce pune Bcom, snap is for mba.

Symbiosis college of arts and commerce conducts no entrance exams for admission to  bcom courses.

Symbiosis College of Arts and Commerce offers various disciplines in B.A. and B. Com for students who have applied for under graduation. Students can specialize in economics, English or psychology in Bachelor of Arts.

Students must have qualified 10+2 from CBSE or any other recognized board to apply for under graduation and admission would be solely based on merit and seats availability.

Hi, symbiosis college of arts and commerce pune for bcom does not have any entrance exam, snap test is for mba not for bcom?

Yes , you are right.
Symbiosis College for Arts and Commerce Pune doesn't conducts any entrance examination for admissions in B.Com course. Admission to this course is being carries out on the basis of board marks only after an online application.

SNAP stands for Symbiosis National Aptitude Test and is being carried out for admission to the MBA programmes in the Symbiosis colleges.