The Symbiosis International University (SIU) has concluded its national level MBA entrance test- SNAP 2015 on December 20, 2015 from 2pm to 4pm across centers in India. At around 30,000 candidates appeared in the test which was conducted in paper-pencil based mode. This year, the test was of moderate difficulty level with 180 questions divided among 4 sections, to be answered in 120 minutes. As per the marking scheme, each correct answer will fetch you one mark, and every wrong answer will attract 25% negative marks. 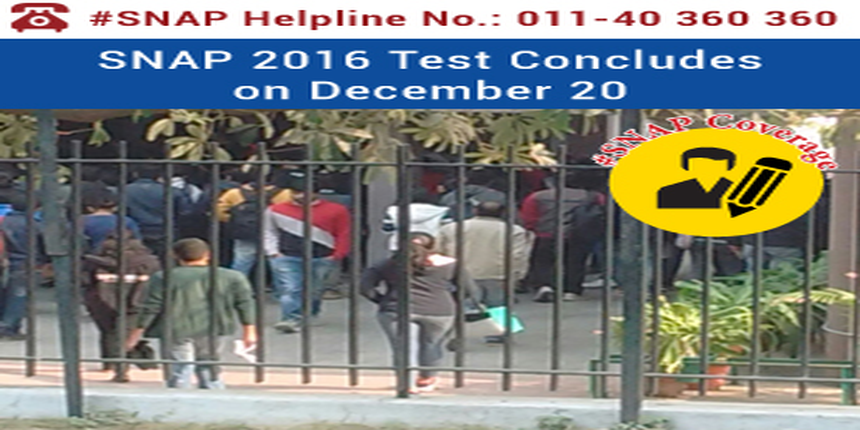 One of the test taker, Nitin, spoke to Careers360 and said, "The overall difficulty level of the paper can be termed as Easy to Moderate. Analytical was easy and English was of moderate difficulty level. There were no snags or wrong questions in the paper. The overall experience was smooth".

The result of SNAP 2015 will be declared on January 11, 2016, declaring the names of shortlisted students for the GE-PI-WAT rounds. The results will be announced in the form of score cards, declaring their sectional and overall scores. After the GE-PI-WAT rounds a final merit list will be prepared after the entire selection process is over and final admissions will depend on the merit list.

Each year SIU conducts SNAP in the month of December for admissions to MBA programmes at SIU and other 14 affiliated B-schools. Last year the SNAP test was conducted on December 21, 2014. SNAP is conducted each year by Symbiosis International University for selecting students for admissions into its 14 post-graduate management institutes across Pune, Nashik & Bengaluru. There are around 1,885 seats across the participating B-schools which will be filled by the selected candidates from SNAP 2015 exam.

SNAP Admit Card 2020 will be released on December 5 (tentative...

Here are some of the colleges for MBA takes admission without entrance exam:

Hope this helps, all the best.
Read More
Answer

What is the SNAP cut off for *mba in infrastructure management at SCMHRD*? Does SCMHRD acceot freshers for MBA in IM? (i am a civil engineering student)

Basic eligibility is just that you have to be graduated in any field either btech or any other course from a recognised university.

Hope this information is helpful.

Is there any entrance exam for symbiosis college of arts and commerce pune Bcom, snap is for mba.

Symbiosis college of arts and commerce conducts no entrance exams for admission to  bcom courses.

Symbiosis College of Arts and Commerce offers various disciplines in B.A. and B. Com for students who have applied for under graduation. Students can specialize in economics, English or psychology in Bachelor of Arts.

Students must have qualified 10+2 from CBSE or any other recognized board to apply for under graduation and admission would be solely based on merit and seats availability.

Hi, symbiosis college of arts and commerce pune for bcom does not have any entrance exam, snap test is for mba not for bcom?

Yes , you are right.
Symbiosis College for Arts and Commerce Pune doesn't conducts any entrance examination for admissions in B.Com course. Admission to this course is being carries out on the basis of board marks only after an online application.

SNAP stands for Symbiosis National Aptitude Test and is being carried out for admission to the MBA programmes in the Symbiosis colleges.