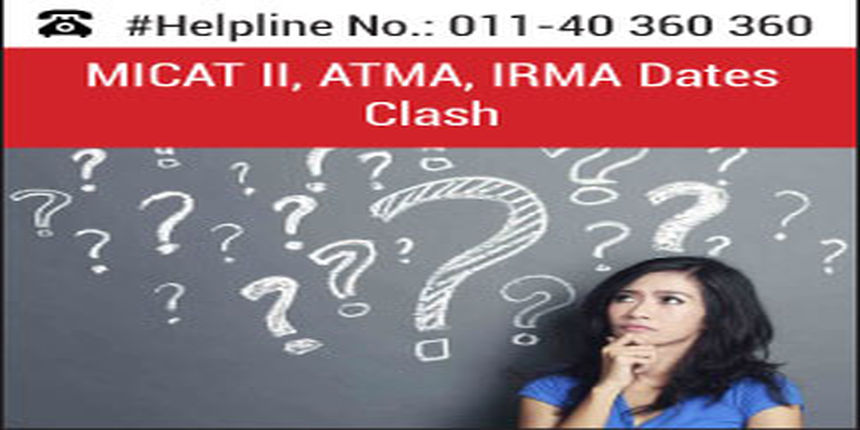 MICA, on December 23, 2015, announced the MICAT 2015 shortlist along with MICAT II dates. According to its dates, the second MICAT is scheduled to be conducted on February 14, 2016, in computer-based mode. This announcement by the MICA officials, however, disappointed many candidates who were planning to take either ATMA February 2016 or IRMA 2016 exam, scheduled on the same day. This announcement of dates by MICA officials has added to the resentment of candidates who are already disappointed over non-disclosure of the MICAT 2015 score cards. After MICA announced results for MICAT-1 on December 23, many test takers questioned its shortlisting criteria for next stage of selection process. The candidates also sought to know their scores and cutoffs and expressed their anguish by commenting on the special Facebook page of ‘MICA Official Discussion Group 2016’.

After MICA aspirants realised that the MICAT II test date clash with that of IRMA and ATMA, many took to social networking sites to express their disappointment. They also demanded re-scheduling of the test dates so that they can appear in other national level MBA entrance examinations as well. One of the aspirants, Apeksha Mehta requested MICA authorities to change its exam date.

MICA officials have, however, not responded to the requests of MICA aspirants.

Incidentally, both ATMA 2016 and IRMA 2016 exam dates were announced much earlier, hence it is likely that MICA may change the exam date. Earlier, during the announcement of MICAT – I, the exam was dated on December 20, which was also the date for SNAP 2015, which was announced much earlier. MICA had promptly preponed the date to December 13, 2015. Careers360 will keep you updated with any change in schedule related to MICAT – II.

Stay tuned to www.bschool.careers360.com for more news and updates on MICAT and MICAT II

MICAT II 2017 Analysis – MICAT II was tougher than the MICAT I. Although the overall difficulty l...

where is the exam center for micat in mumbai?

According to test center of MICAT,test will be conducted in CBT across 48 cities in different parts of India.Cnadidates can choose maximum three centre from the list of centre.For having centre at Mumbai Candidates can go for cities with MUMBAI AND NAVI MUMBAI..MICAT qualified candidates will have to appear for GROUP DISCUSSION AND PERSONAL INTERVIEW ROUND for admission..

Refer to below mentioned link for more details regarding MICAT:

View All Questions
Have a question related to MICAT ?