MICA Ahmedabad, the conducting body of MICAT, has released the admission notification for Post Graduate Management in Communication (PGDM-C) 2017-19. As per the notification, MICAT-I will be conducted on December 11. The application process will start from end of September or first week of October and will end on November 25, 2016. 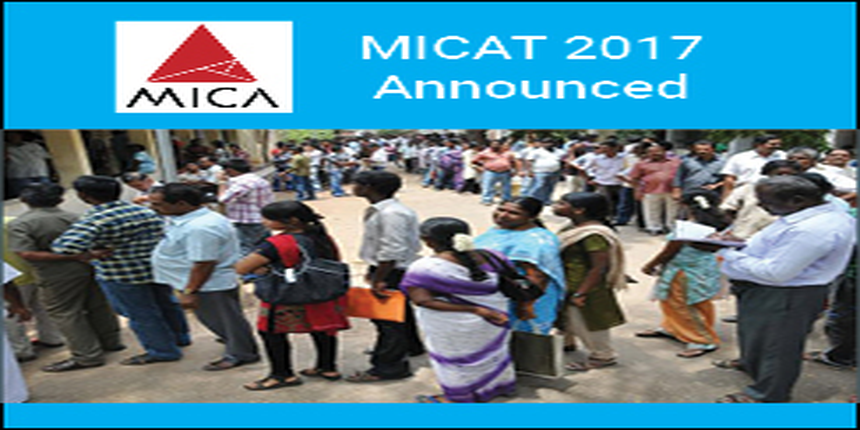 MICAT 2017 Important Dates are given in the table below.

To be eligible to apply for MICAT, candidates must have valid scores of at least one of the national level tests namely, CAT 2016, XAT 2017 and GMAT (2015 onwards).

MICAT is a Computer Based Test (CBT) and will be conducted twice for selection of PGDM-C 2017-2019 batch. In the test, MICA will assess candidates based on 6 sections: Psychometric (P), Verbal ability (VA), Quantitative ability (QA), General awareness (GA), Divergent-Convergent Reasoning (DCR) and Descriptive Test (DT). MICAT will be held across 27 cities, which is increased compared to last year’s 14 test cities.

For shortlisting candidates, MICA will use the better of the two MICAT Scores. The shortlist process consists of a Group Exercise and a Personal Interview. The officials have described the MICAT 2017 selection procedure, as per which the merit list will be prepared as per the below-given steps.

The following table brings to you the parameters and weight-ages assigned for the final selection.

Short listed candidates will be called for GE and PI at MICA campus, Bangalore, Delhi, Kolkata, and Mumbai.

MICA conducts MICAT for selecting candidates to its 180 seats in the two-year Post Graduate Diploma in Management – Communications (PGDM-C).

MICAT - II result declared on February 23; Score Cards to be a...

MICA has announced the result for MICAT – II on Tuesday, Febru...

MICA Ahmedabad has declared the score cards for MICAT 2016 on ...

10 Certifications That Each Online Marketer Must Have
View All News