Indian Institute of Foreign Trade has started the application process for its national level management entrance test- IIFT 2017, for the academic session 2018-20. According to the official notification released, the registrations will continue till September 8, for both online and offline modes. Besides the registration details, officials have announced the test dates and time, too. The two-hour offline test- IIFT will be conducted on Sunday, November 26, 2017, from 10 am and 12 noon, across 20 test centres. 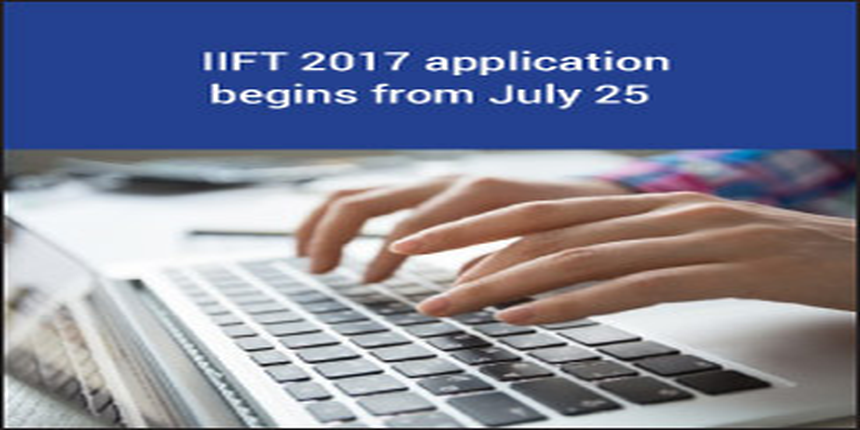 According to the IIFT 2017 eligibility criteria, candidates must have a recognised Bachelor’s degree of minimum three years duration in any discipline with 50 per cent marks. Candidates appearing in the final year examination of graduation are also eligible to apply. Foreign National students, NRIs and Children of NRIs applying for IIFT 2017 must have General Management Aptitude Test (GMAT) scores declared till January 1, 2015, and the same should be received by the institute by March 31, 2017, to be eligible for admissions.

The last date for obtaining prospectus and receipt of applications for Foreign Nationals/ NRIs/ Children of NRIs is Thursday, February 15, 2018.

The application form of IIFT 2017 can be filled in both online and offline mode. The application fees can be paid online through debit card/ credit card/ net banking payment options. The IIFT application fee for general category is Rs. 1550 and that for SC/ST and Physically Handicapped candidates is Rs. 775.

The exam pattern of IIFT 2017 remains same as of previous years. The test will have objective type questions divided across four sections. The number of questions in the entrance may vary and can be between 120 and 200. Each question will have four options from which candidates have to select the right answer. The marking scheme for each section is different.

The test will be conducted in 20 major cities across the country. Candidates have to select the IIFT exam centre as per their convenience while filling the application forms.

Indian Institute of Foreign Trade (IIFT) conducts its national level entrance exam for admission to its two years MBA International Business programme. The programme can be pursued at IIFT Delhi and Kolkata. The total number of seats offered by IIFT Delhi and Kolkata campuses for MBA-IB final admission is 210 and 140 respectively, inclusive of all categories, making the total number of intakes to be 350. It is likely that around 40,000 students will register for this year’s test.

Know all the information pertaining to IIFT 2021 registration-...

since you did not mention any particular course I would give you details about iift mba admission process. iift considers to be an Indian best academic institute which offers two years master of business administration course. it has delhi and kolkata campus. admission is based on the entrance exam conducts by NTA iift ADMISSION TEST. the test comprises of the questions from gk, general ability, quantitative aptitude, verbal reasoning, english. based on entrance exam score candidaates are shortlisted and called for gd and personal interview rounds. however selection would be based on candidates performance and interpersonal skills in gd  or Pi rounds. however there is little impact of past academic records.

hope you may understand.

Which one is better , IIM Ranchi or IIFT Kolkata?

In my opinion IIM RANCHI is far better than iift kolkata because tag matters in life. If you get  passed out from IIM then beleive me you can work in abroad easily. But in case of IIFT KOLKATA you will not get that reputation. Also placement statistics is far better than iift kolkata and high chances of getting selected as CEO of the company directly.

ALL THE BEST FOR YOUR FUTURE!!!

what is nid,nift,uceed,iift who are eligible and all about them

here are the answers for your question-

NID is basically a design college where students are taught about designs in various fields.the eligibility criteria for the exam is-

students must have passed the Bachelor degree examinations, they should have a  Full-time Diploma of minimum 4-year duration in any of the fields such as  Design/ Architecture/Fine Arts/Applied Arts, after 12th standard, from any university .

UCEED conducts exams to get students for IITs and also to some design colleges. the eligibility criteria is-

students must complete the HSC exam/10+2 board exams.Students who will appear in the 10+2 board exam in the year 2021 are also eligible to apply for the admission under UCEED . 2021.

NIFT :it stands for National institute of fashion technology.This is India's premier institute for fashion design.The eligibility criteria for this exam is-

.UG: 10+2 or equivalent from a recognized Board

PG: Bachelor's Degree or equivalent from a recognized University

IIFT is a national-level management entrance exam conducted once in a year by the National Testing Agency (NTA), This exam is for the students who wants  admission to MBA program offered by Indian Institute of Foreign Trade.The eligibility criteria for this exam is -

candidates should possess a Bachelors' degree of a minimum of 3 years in any discipline from a recognized university. Students should have obtained at least 50% marks in graduation .