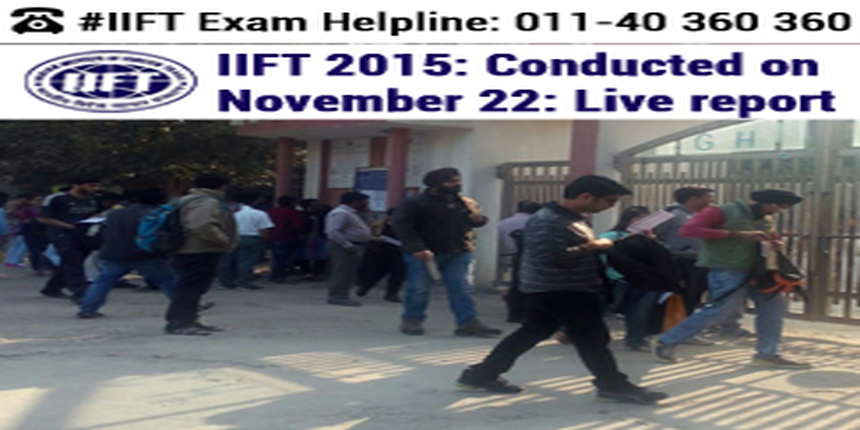 Indian Institute of Foreign Trade, New Delhi is conducting the IIFT 2015 entrance exam on Sunday, November 22, 2015. The paper pencil based test is scheduled from 10 am to 12 noon. Approximately 60,000 candidates are appearing for the exam for the admission in IIFT Delhi and Kolkata.The IIFT 2015 exam is being conducted at 20 cities across India. The entry started from 9.15 am and ended by 9.45 am. The candidates started reaching the test venue from 8 am onwards so that they do not get late for entry.

The candidates were seen spread across the test center going through their notes for last minute preparation while others were seen huddling across the notice board to check the room number allotted for them.

12:30 pm: The test takers start leaving for their homes after the IIFT 2015 entrance exam concludes.

12:15 pm: The exam takers share their experience and feedback on the paper. Majority of the candidates rated the paper to be of tough difficulty level.  There was no surprise thrown in the paper. The Data Interpretation, Logical Reasoning and Quantitative Analysis were considered to be tough by the test takers.

12:10 pm: Test takers start coming out of the exam venue, while some bear a satisfied expression, some look tensed.

9:55 am: Entry gates are closed and IIFT aspirants who are reaching now are not allowed entry

9:45 am: Late comers are seen rushing to the centers

9:15 am: Entry process starts at the test centers. The center authorities check their admit cards and the identity proof before allowing entry

9:00 am: Test takers share their pre exam anxiety and preparation level with Careers360.

8:45 am: Aspirants go through their notes for last minute revision and discuss with fellow candidates about the test.

8:30 am: Candidates start pouring in at various test centers.

IIFT 2015 entrance exam was conducted for the admission to the flagship MBA in International Business (MBA-IB) programme offered at its Delhi and Kolkata campuses. The exam pattern remained the same as last year.

Stay tuned to bschool.careers360.com for more news and updates on IIFT 2015.