The All India Council for Technical Education (AICTE) has announced the results for its national level management test- CMAT 2016 on January 21, 2016. Jivtesh Singh has topped in CMAT 2016 with a total score of 300. He is followed by Jugad Singh Grewal (AIR 2) and Mallikarjuna Mullangri (AIR 3), both with an overall score of 296. 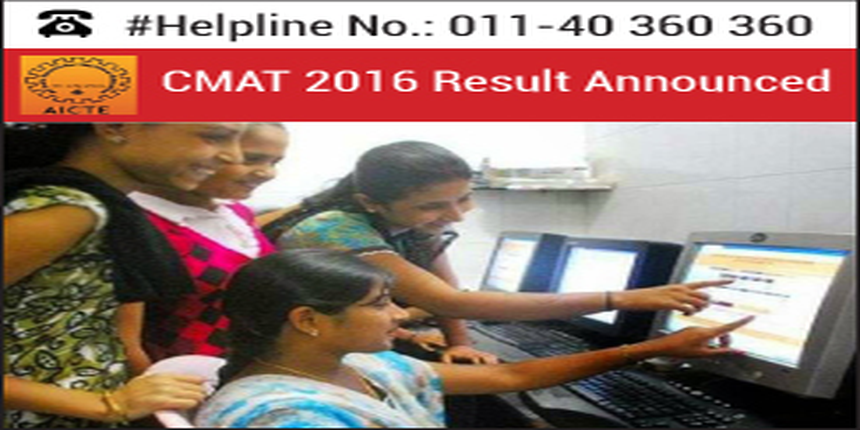 The result has been declared in the form of score-cards and merit list, having candidates' sectional and overall scores, along with overall percentile. CMAT 2016 was conducted on January 17, 2016, in a computer-based format across test centers.

Careers360 brings you the list of Top 10 Rankers of CMAT 2016 along with their overall scores.

CMAT 2016 Results has declared the ranks for 55084 candidates who had appeared in the examination. Last year, the number of test takers in CMAT February 2015 session was around 57,700.

The CMAT 2016 Score Card will have overall and sectional scores, percentile and overall rank. Candidates can also check CMAT 2016 Merit List which will include the details of all the test takers in terms of rank, name, score and percentile.

The CMAT 2016 Score Card is available for print from January 21 till the start of the shortlisting procedure. On the basis of the scores of CMAT 016, candidates will be able to apply to the CMAT accepting participating B-schools, which numbers to be over 1000.

The B-schools will declare the shortlist of candidates on the basis of the CMAT cutoff and the admission criteria of the institute. The shortlisted candidates will have to appear for the Group Discussion (GD), Personal Interview (PI) and or Written Ability Test (WAT). The list of the finally selected candidates will be notified either on the website or the students will be sent call letters for admissions.

CMAT 2016 was conducted on January 17, 2016, across centers with major technical glitches reported from some of the CMAT 2016 exam centers. However, the DI and Quants section were tricky; the overall test was of moderate level.

Till last year, CMAT used to be a bi-yearly exam conducted in February and September in a 4-day window. AICTE scrapped its CMAT 2015 September session test and announced that CMAT will be conducted once a year in January from 2016.