The admit card of CAT 2017 will be available for download from October 25, 2017, 1 PM onwards. The release date has been postponed by a week by IIM Lucknow, conducting body for CAT. Earlier, the CAT 2017 admit card was scheduled to be released on October 18. The availability of CAT admit card will be online only and the last date to download it is November 26, 2017. 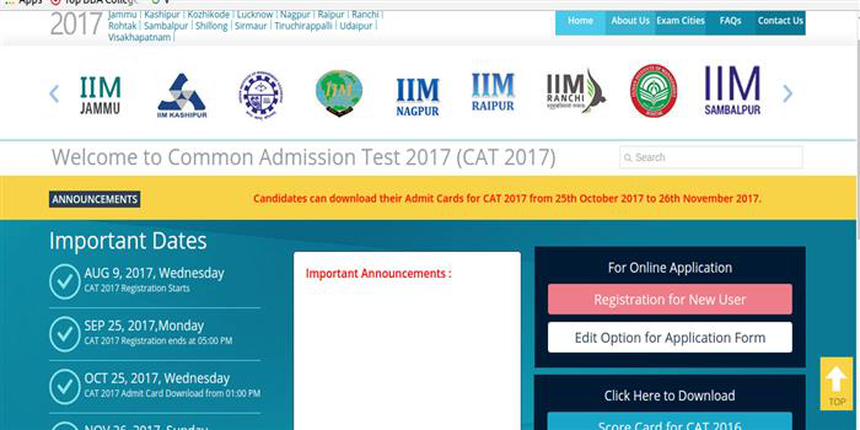 It is expected that the CAT mock test 2017 or CAT tutorial will also be available from October 25. However, no information regarding the tutorial has been released by the officials.

The CAT 2017 application process, which started from August ended on September 25, after an extension of five days. As many as 2,31,000 candidates have applied for CAT 2017, which in comparison to CAT 2016 application number has dipped marginally.

This is not the first time that CAT admit card release date has been postponed. Last year also the admit card was postponed by six days. IIM Lucknow had also facilitated the CAT application correction window from September 27 to 30, 2017, in select few fields.

As per the CAT 2017 exam pattern, it is a computer based test of 3 hours duration carrying 100 multiple choice questions (MCQs) from Verbal and Reading Comprehension (VARC), Data Interpretation & Logical Reasoning (DI & LR) and Quantitative Ability (QA). Each section is timed for an hour and candidates will not be able to move between the sections. Each section will have some non-MCQs (multiple choice questions) as well. The marks allotted per question is 3 and for each wrong answer, there is negative marking of one mark. However, there is no negative marking for non-MCQs.

CAT 2017 will be conducted on November 26, 2017, in forenoon and afternoon slots. The CAT result is expected to be declared by the second week of January 2018.