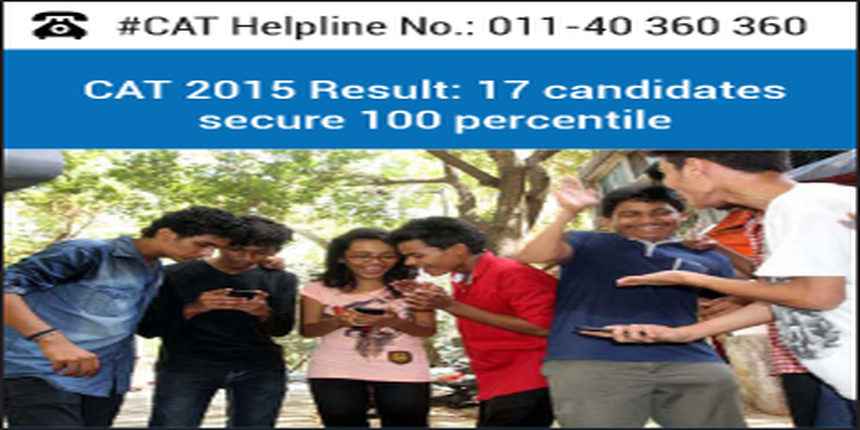 The following table brings to you the total number of test takers according to gender categories.

The total number of transgender candidates appearing for the test was 41 out of 80 applicants. None of the test takers from this category has secured above 90 percentile.

The city of Pune in Maharashtra has recorded the highest number of test takers, which is 10,359.

The following table brings to you the comparison of test takers of CAT 2014 and 2015.

CAP 2020 - Know all the details about Common Admission Process 2020 like important dates, cutoff,...

All About MBA - Know all about Masters of Business Administration (MBA) courses, eligibility, adm...

How to prepare for GK section of CMAT, IIFT, SNAP and XAT?

How to prepare for GK section of CMAT, IIFT, SNAP and XAT – GK is an integral part of almost ever...

To add to your knowledge, You can take CAT examination in any year of your graduation, but only the CAT exam taken in your final year will be counted as  valid. You could also write it any time after graduation suppose while working. But thing here is there should be no break, means you should either be working in a company/startup or you should be studying a recognized degree.

To be honest, there's no use of taking CAT exam in second year. If you really want to go in best B-schools. It is advised to take CAT in the final year of your degree. For now the best thing you can do is to start preparing for CAT, know the syllabus for CAT before hand. You have enough of time to cover whole syllabus before CAT exam.

How long CAT , XAT and CMAT results are valid ? Is this possible to use(cat,xat n cmat) 2020 result after August , I mean for the next batch ?

Hello,
No, you cannot use 2020 result for the next session of 2021. For the new session you have to appear again for all the exams of cat, xat and cmat. With this years result you have to take admission in this year only.
Hope it helps. Thank you
Read More
Answer
Answer Later
Report
5 Views

how to prepare for an MBA college interview with 65% throughout 10+2+3 academic performance, no extracurricular activities and with no work experience if I really want to pursue MBA this year from a good college?

If you really need to pursue MBA, then you have to give really good performance in CAT, MAT, XaT etc exams should develop good communication skills which is really necessary for MBA.

You can also gives for an intership witch will gives you more value during the personal interview round and for your future.

But at most score 90 and above in CAT exam.