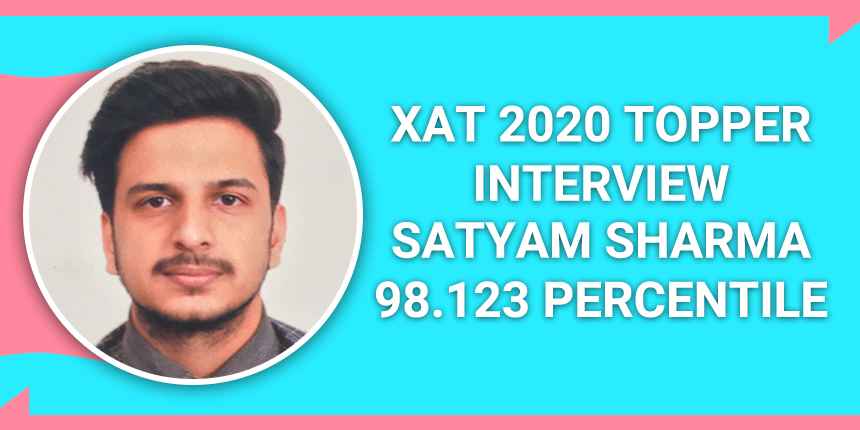 XAT 2020 Topper Interview - Satyam Sharma, XAT 2020 topper is a perfect example of someone who achieves their dream by believing in himself. Xavier School of Management (XLRI) has released the XAT 2020 result on January 16. Satyam, dedicated himself completely to preparing for XAT while he balanced it impressively with his other MBA entrance exam. Satyam grabbed 98.123 overall percentile in XAT 2020 and apart from that he gave NMAT, CAT, and SNAP and scored around 90 percentile in all of them. In this XAT topper interview, Satyam shares his success mantra - with the help of online coaching and mock test he is able to ace the XAT 2020. Satyam added, Just don’t take the pressure of proving yourself and make sure you do not lose your calmness and composure. Sooner or later, Hard work surely brings success.

Read the full interview of XAT topper to know the nuances, preparation tips so that you too put your name in the top scorer’s list of XAT.

Careers360: Why XLRI over other B-schools?

Satyam: Although XLRI appears to be at par with the top IIM’s, XLRI is one step ahead of the other B-schools as far as the practical application of knowledge is concerned. It enables students to get friendly with the real business environment and thus makes them better managers.

Careers360: Tell us something about yourself?

Satyam: I belong to a middle-class family residing in Delhi-NCR. I am a graduate from the University of Delhi and I have been preparing for various MBA entrance exams since May 2019. I aspire to reach the top-level management making vital decisions for the organization which I will be a part of.

Careers360: What were your XAT 2020 overall and sectional percentile? Apart from XAT, which other entrances you appeared for and what were your percentiles?

Careers360: When did you start preparing for XAT? Please share in detail the month-wise preparation strategy you followed.

Satyam: I started preparing for CAT and all other MBA entrance exams in May 2019. Both CAT and XAT have almost the same level of difficulty and syllabus (accept for the Decision-Making section in XAT). So I kept my focus on preparing for Quants and Verbal Section of CAT which itself did the part for XAT. After the CAT was over, I started working on Decision Making questions and along with that, I kept revising the concepts of Quants which I had learned during CAT preparation.

Careers360: What is your take on the XAT test pattern? Should the authorities switch to the previous pattern or the changed pattern is good?

Satyam: Well, the major change that undertook in the XAT test pattern was the addition of the Decision-Making section which turned out to be a boon for some and bane for the other. Many coaching institutes came up with the answers that were contradicting each other and in some cases, the original answers as per the XAT official answer key were totally unexpected which created a lot of confusion in aspirants’ minds. However, I believe that the new section introduced by XLRI is quite scoring if one gets to know a little about business ethics and values, and also their applicability. So I think authorities should stick to the new pattern as switching back to the old one will create even more chaos.

Careers360: What was your preparation strategy? Please share the section-wise strategy in detail.

Satyam: For Quants: As mentioned already, I did not prepare for quants separately for XAT. In fact, as soon as I started my preparation I looked for getting hold of the easier chapters. For each and every chapter, I practiced questions belonging to different levels of difficulty. The key in this section is to identify which questions are easy or doable and which ones are difficult or time-consuming.

For Verbal: This is the most daunted section for me as I struggled a lot while answering these questions (especially the para jumbles). The only trick to tackle this section is to read as much as one can. When one gets adapted to the various writing styles of the authors and performs diverse reading, then the person is good to go!

For Decision Making: As it is a new addition, no one had enough questions to practice. Neither did we have enough ‘previous year questions’. So I learned about the various business ethics, values and norms and then through the limited questions that I had, I started noting their applications in various cases and dilemmas. Once CAT was over, I drew all my attention towards this section. This section demands a lot of practice but when one gets the hold of it, it is the most scoring section in XAT.

Careers360: Which books and study materials did you refer to?

Satyam: I referred to books written by Arun Sharma and the online material of iQuanta. I also took a mock test series by Career Launcher.

Careers360: When did you start taking the mock tests and what was the frequency? How did you utilize it for preparation?

Satyam: I started giving mocks 2 months prior to the XAT exam. Initially, I did 1 mock in 2 weeks and when CAT was over I switched to 1 mock per week. Mocks play a vital role in an aspirant’s preparation as one can make as many mistakes while writing them and assure that those mistakes are not repeated. I never had a brilliant score in XAT mocks but I analyzed my mocks thoroughly and tried different ways of attempting the paper. Till the time of actual paper, I finalized my attempting strategy, my strong and weak areas and got to know which section should be given how much time.

Careers360: How did you manage your time during the test?

Satyam: XAT has a time limit of 165 minutes. I targeted the easy quant questions first and planned to do the Data Interpretation question in the initial time so that I could give more time to the tougher questions later in the exams. After finishing the easy ones from Quants, I moved to the verbal ability section and attempted questions in this sequence – Reading Comprehension>>Parajumbles>>Other Verbal Questions. When 70 minutes were left, I moved to the DM section and tried to attempt as many questions as I could in the next 45 minutes. I devoted my last 15 minutes to the questions from Quants which I marked for review.

Careers360: What were your strong and weak areas? How did you tackle your weak area of the test?

Satyam: Quants has always been my strong section and Decision Making was the section I did not really know much about. But Verbal used to trouble me a lot, more specifically Para jumbles. To do away with my weakness, I read a lot of stuff and kept practicing all the questions that I encountered. Although I could not perform well in Verbal Section, I saw a lot of improvement in my solving abilities while doing para jumbles.

Careers360: How did you prepare - Self-study or Coaching? Please explain which one do you think it is better and why?

Satyam: I took up online coaching and used their material for my preparation. However, most of my preparation was done through Self-study only as online material cannot make you sit and study for hours. Ultimately it is you who needs to get out of your comfort zone and burn the midnight oil. I don’t think Coaching helps much in an MBA aspirant’s journey as it is the individual who has to practice on his/her own to achieve their goals.

Careers360: How did you re-energize yourself during the course of preparation for

Satyam: At several points of time in my course of preparation I felt like “things are not going as per planned”,” mock scores are extremely low”, “what is going to happen to my career” and all the stuff of such sort that made me anxious. At these points of time, I used to back myself up, go for a walk or talk to my parents so that my mind did not get deviated towards the unnecessary things. Also, I used to solve the questions from chapters that I find easy to boost my morale and get back to work.

Satyam: To all those who are preparing for XAT and trying hard to make it to their dream college, I would like to tell each one of them that you are already doing a thing to be proud of. Just don’t take the pressure of proving yourself and make sure you do not lose your calmness and composure. Sooner or later, Hard work surely brings success.