SNAP has been conducted on Sunday, December 20, 2015 across 30 cities in India. As per the test takers, the overall difficulty level can be termed as Moderate to Tough. In terms of sectional difficulty level, GK was found to be tough by majority of the candidates. This article of Careers360 brings to you the overall analysis of SNAP 2015. 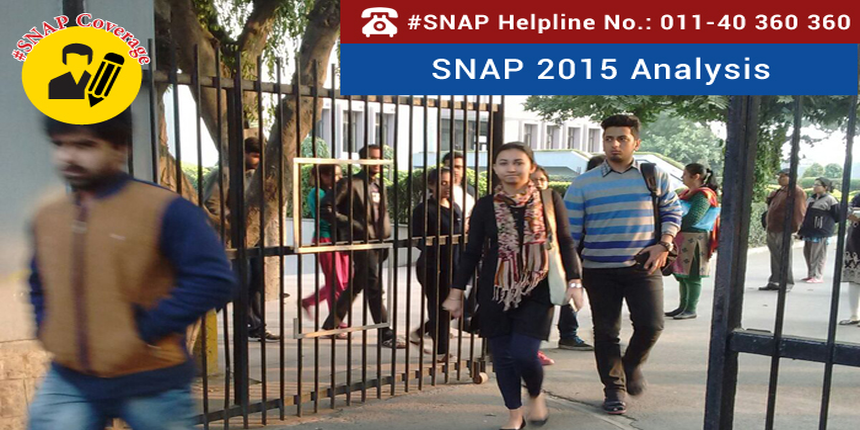 Let us first take a look at the overall exam pattern.

The duration of the test was 2 hours, held from 2 pm to 4 pm. Each question carried 1 mark and for each wrong answer there was negative marking of 0.25 marks. Now let us have a look at the section wise analysis. As per Nitin Madhwal, a SNAP 2015 taker, “The overall difficulty level of the paper can be termed as Easy to Moderate. Analytical was easy and English was of moderate difficulty level. There were no snags or wrong questions in the paper. The overall experience was smooth.”

Now let us have a look at the section wise analysis.

As per the candidates, the General English section was easy compared to the other sections. There were 40 questions in this section from Reading Comprehension and English Usage or Verbal Ability areas. There was 1 RC passage with mix of direct and inferential questions. According to the expert analysis by Gautam Puri of Career Launcher, the section was tougher compared to last year.  Majority of the questions were from Vocabulary. The RC passage was tough to read but the questions were simple.c

According to the test takers, this was the toughest section. This section too consisted of 40 questions of 1 mark each. Majority of the questions were from Business and Economics. The questions from this section were a mix of Static GK and Current Affairs.

This section consisted of 30 questions carrying 2 marks each. Most of the test takers found this section to be tough. The topics of the questions are as follows:

"Almost all the typical areas of the Reasoning section were present. The questions based upon Analogy and Coding Decoding were quite difficult," mentions Puri.

The following table brings to you the expected cutoff scores for the top SNAP accepting B-schools.

Stay tuned to bschool.careers360.com for more news and updates on SNAP 2015.

While entering the class 12 marks we have to consider best of 5 subjects or the same way we considered 6 subjects in CAT?

You are required to include the marks of all the subjects for the calculation of percentage.
You need to include your optional subjects as well (if any).
It is advisable to not leave the optional papers mark and do not enter 100 as your percentage.
The IIMs are very strict and very particular about this things.
So please fill out the details properly.

hlo Im a student of undergraduate bcom and now Im in 2nd year so Im really confused about the college and my family members tell me to go in sms college of varanasi for mba I think this college take you without any exam of cat , snap etc so I have to ask that is this decision is correct can I go?

I would recommend taking an entrance exam such as the CAT or another good college entrance exam where experience is not a criteria. You can apply to the colleges via CAT score without having work-experience. As a master's degree, it must be completed in a good college with good faculty, academic records, and placement records, among other things. If a college does not require an entrance exam or has no competition for admission, it indicates that the college is only interested in providing a degree and not in providing good placements and knowledge.

So believe in yourself and take your decision, What will work for you? Just a degree or a knowlege from good college with degree with good placement.

can we snap exam any age limit

There is no upper age limit for applying for SNAP. The candidate must, however, have finished graduation or be in the last year of a bachelor's degree programme.

Candidates must have graduated with a minimum of 50% marks or equivalent grade from a recognised / Statutory University or Institution of National Importance (45 percent marks or similar grade for SC/ST). Candidates must be at least 21 years old to be considered.

You can get the complete eligibility criteria from the given link

Your marks in 10th and 12th marks are very good ,your marks in graduation average and overall you have a decent academic profile and with a good score in CAT, you can easily manage your average score in your graduation. You can target IIMs which are the top B - schools in India and even target Faculty of Management Studies, University of Delhi (FMS, DU) which is one of the top most schools and doesn't gives weightage to graduation marks for the selection process. FMS selection parameters weightage is given below for reference,

You can get details at

Coming to score you should get,

For details about cut off visit :-

To help you further,

Here's a brief of general admission process in mba

---) then you get shortlisted on the basis of your score obtained by you in entrance exam,your academic profile ,work experience etc

---) Then you have to go through WAT i. e written ability test/GDi. e group discussion/PI i. e personal interview, and then you are finally selected for admission on the basis of performance in these rounds  , percentile score in entrance exam, academic profile like percentage of marks obtained by you in  class 10th, 12th and graduation and work experience etc. The admission process may vary from one college to another.