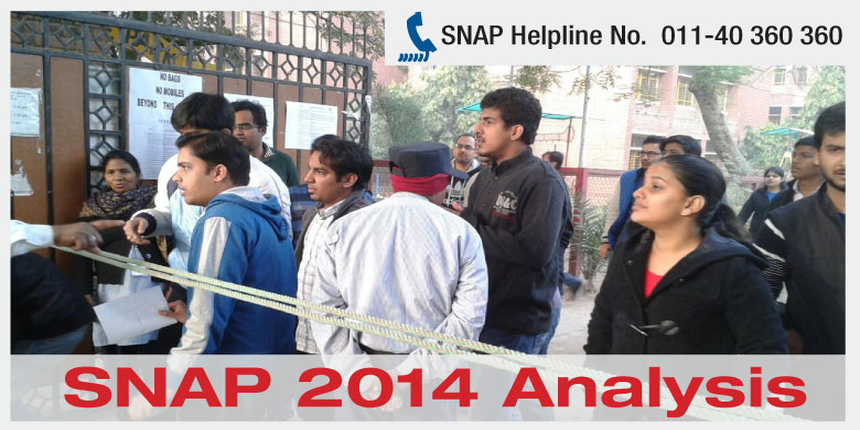 The SNAP 2014 exam was held on Sunday, December 21, 2014. The exam is conducted by Symbiosis International University for the admission in the 13 B-schools under the University. This article will bring to you the SNAP 2014 Analysis based on the test takers’ and expert feedback.

Based on the feedback shared by the students, the difficulty level of the paper was easy to moderate. According to the experts, the paper was similar to that of last year except the fact that GK section was tougher than expected.

The test takers were not allowed to take the question paper outside the hall.

This year, the test takers found the General Awareness section to be on higher side of difficulty which is unlike the regular pattern. Analytical & Logical Reasoning was tough too. Majority of the SNAP takers found the Quantitative Ability to be moderate and the General English sections on the easier side. Dev Sharma, a test taker sums up saying, “The English section of the exam was the easiest. It was not expected but the questions were easy and fun to answer. Overall there was no problem in any of the section of the exam”.

The following table brings to you the structure of SNAP 2014.

Now let us have a look at the section wise analysis of SNAP 2014.

This section had 40 questions with 1 mark each. The difficulty level of this section was easy but lengthy. However, the surprise lied in the fact that there were no Data Interpretation questions in this section. Majority of the questions were from the Arithmetic section. Time & Distance topic had a lot of questions. “I found the Quantitative section to be moderate,” says Akanksha Garg, who took SNAP 2014 exam in a center in Noida.

The General Awareness section had 40 questions and had 1 mark for each question. The difficulty level of the section was difficult,. Much emphasis was given on business and economics. Akshesha, who took the SNAP 2014 paper says, “I didn’t expect the GK section to be too tough. The questions were quite difficult hence it was a surprise for me.”

Stay tuned to bschool.careers360.com for more news and updates on SNAP 2014

SNAP Selection Procedure 2020 - The exam authority will start the SNAP 2020 selection procedure a...

Hi, I have 95.8 for SNAP. Will I get a call from SCMHRD for business analytics and how should I prepare for its computer exam.

these are the colleges, from which you would get a call on the basis of your SNAP percentile.

My SNAP score is 59.75 and Percentile is 74.62. What are my chances? I wish to get into SIIB Blore. Will I get in? Also, is the percentile too low according to the score this year?

Aashvi, some colleges that accept a score of 74.62 percentile have been listed here:

Also please note that you can get a call from any of these institutions only if you had applied for it during the registration period.