The renowned spiritual leader Sadhguru Jaggi Vasudev, founder of Isha Foundation, visited the Bennett University in Greater Noida to interact with the students in ‘Youth and Truth’ session on February 7. The mega campaign was a platform for embracing the truths of life, that make us unique yet let us be a part of this cosmos. In September 2018, Sadhguru launched a nationwide movement called ‘Youth and Truth’ which is simply an invitation to young people to ask questions for which they never found answers. 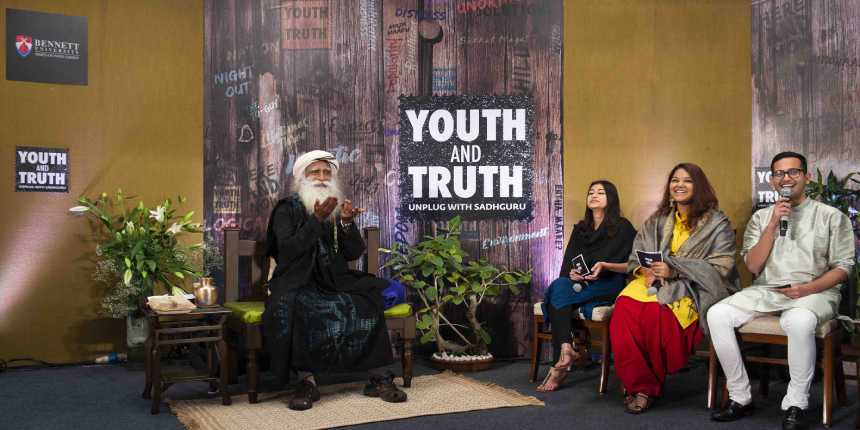 Flooded with questions on a wide range of subjects by an enthusiastic audience, Sadhguru responded with wit, wisdom and liberal doses of humour.

Hinting at teachers, he joked that the crowd of students was being tortured by a few people because “they read a book ahead of us”. However, he also attacked religious leaders for posing as superior beings. “They read a big book and make you feel like they know the universe. The universe cannot be contained in one book,” he told the students.

The students wanted to know if Sadhguru was a PUBG fan, but had to instead introduce him to the popular phone-based game. He was also questioned on heartbreaks, and how to “undo” the love.

He said attraction is nothing but the hijacking of the system by hormones. However, one must be alert to the changes in the mind, especially because serial heartbreaks can make a person paranoid and keep one from building human bonds. “Serial heartbreaks will look like fun for some time, but after a while, you will just have no interest in anybody in your life. Because another human being is a problem,” he warned.

He was also asked for his take on many controversial issues, including the entry of women in Sabarimala. He responded that the issue was less about gender equality and more about fulfilling political wishes. According to Sadhguru, Sabarimala is the deity’s abode, and his wish -- that women not enter his “bedroom” -- should be respected.

“There is no question of women entering or not entering. They are making it out like they are not being allowed because of the menstrual cycle that a woman has. But this is not the case. This one deity, he is a monk. He said this is my abode, where women don’t come. This (controversy) is a manipulation, political wills are being fulfilled,” he said.

Popular RJ Raunak also visited the Bennett University campus to attend the event. The young RJ talked to the students about Sadhguru and the transformation he experienced in his life after attending the inner engineering session in Coimbatore. Further sharing his experience with the students, Raunac said Bennett University is giving a unique opportunity to students to seek answers to their lingering doubts. He encouraged students to forego limits, boundaries and taboos. From sex to drugs to relationships and midlife crisis, from fashion to freedom, from astrology to homosexuality, Ramayana, ambition, the beef ban, reincarnation, love, artificial intelligence, purpose of life, career choices, no question is irrelevant.

The University campus is celebrating the week of February 4th, 2019 as Youth and Truth Week. The students from different programmes enjoyed the event to its full extent. Nandana Varshney, 3rd year B.Tech student, said, “This event brought me closer to reality as I was amazed to discover what remains undiscovered.”

“I wasn’t well aware of Sadhguru but working with the Isha Foundation team, I gradually understood the ideology and a changed perspective of life,” says Souvik Mishra, 2nd year BTech student, a member of the organizing team.

Bennett University has released the registration form for the ...

Know all the information related to Bennett University announc...

“Business Courses that make Students Industry-Ready” as said b...

Bennett University offers its quality BBA honors Degree with I...

How many Percentage is needed in 10+2 for getting admission in Bennett university (BA LLB).

To get Admission in Benett University , as per eligibility criteria to be eligible you need at least 60 % in your class 12 board examination or equivalent.

While the selection for Admission is through 3 modes:-

For detailed information visit its Official page , the link is provided below

what is the date of Bennett university exam(BA LLB)

So for admission to Bennett University you must look upto preparing for CLAT or LSAT and check their dates or you can even take admission on the basis of your 12th marks. For detailed information regarding admission procedure follow the link; Bennett University (https://www.bennett.edu.in/wp-content/uploads/2019/12/Admission-Procedure-BA-BBA-LLB_2020.pdf)

is bennet university will be good for journalism

The course is directly guided by The Times Group. They get the Times benefit.Most of the faculty is from there and thus are well versed with what goes inside the newsroom. Almost 60% of our course is based on practical work, and theory only takes the rest 40.

Well, Bennett University is one of the best choices for a career in mass communication and journalism. The exposure given to the students is truly amazing. They help you to develop the skills required in the various mediums. The teaching pattern is quite different from other colleges; the ratio of practical and theoretical is 70% - 30% respectively. Total fees is 9.6 lakh for 3 years.

Is there any scholarship in Bennett University offered to Meritoris student so that their fees can offset by their scholarship?

We are in one of the top institutions, We offers very good scholarship to the deserving students, All the details are given on college website. We have the option for 100% scholarship based on your JEE Main rank & your 10+2 score so if you refer the website there are four different type of scholarship so it starts from 100% then 50% & there are other two levels depending where you stand academically Either your JEE main rank & your 10+2 score so you will get the scholarship.

How does an Internship structure flow in Bennett University ?

After third year there is mandatory scholarship of 8 weeks then in last semester there is a mandatory project semester of one semester that means of 16 weeks so apart from that many students even do internship after first year & second year but that is optional. Many students are excited that they don't want to loose their time & energy.

Some of the students in Bennett university even doing four internship in the time of four years so that's how it is structured so Mandatory is only two internship one is 8 weeks & one is 16 weeks.

MMS/PGDM 2013 at Thakur Institute of Management Studies and Research

Your Bennett University, Greater Noida brochure has been successfully mailed to your registered email id .