How to crack PI-WAT: “Clarity of goals post MBA is important for clearing PI”, says Tanuj Makkar of IIM Lucknow

How to crack PI-WAT : Tanuj Makkar, one of the toppers of CAT 2016, believes in the long-term benefits of an MBA degree and how he can leverage the strong alumni network at IIM in his favour. Tanuj, who topped the exam with 99.45 percentile, is currently pursuing the management program at the prestigious management school- IIM Lucknow. 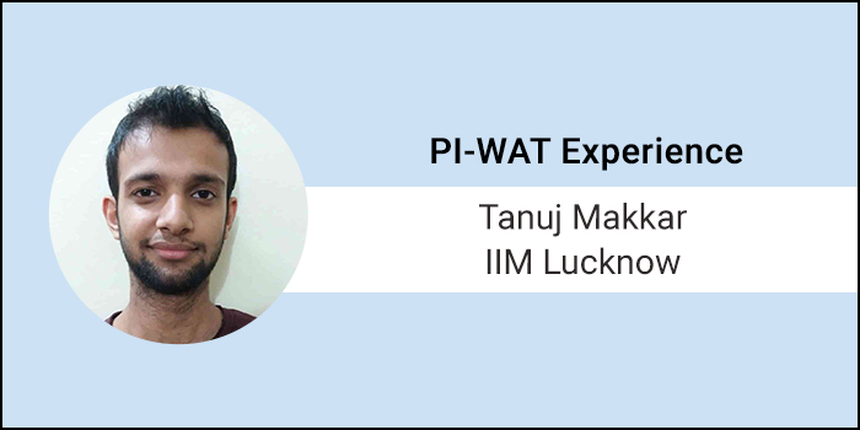 Tanuj put together a regular study plan that allowed him to practice WAT on a regular basis and employed an effective time management strategy for this. “I think the most important factor for clearing the PI is the clarity of goals post MBA. If one is sure about what he/she wants to achieve from MBA and that is articulated to the interviewer, then the rest of the interview should be a cakewalk” says Tanuj. He also carries a working experience of 37 months at the world-renowned financial firm, Goldman Sachs. In this interview with Careers360, Tanuj talks about his preparation days and how smartly he balanced his professional and academic life while preparing for the exams. Read on to know more.

Careers360: What is the process to get selected and secure a seat in IIM Lucknow?

Careers360: Please give us a deeper insight of your overall experience during the selection procedure.

Tanuj: It was a seamless experience for me to attend the IIM Lucknow process. The process started with a written ability test where the topic of the test was “Net Neutrality: A boon or bane”. This was followed by a personal interview. The panel for the interview consisted of two people who were both professors at IIM Lucknow. The interview started with questions like “Why MBA, what are your short-term and long-term goals” and then it delved into specific questions about my profile and work experience. The interview lasted for 20-25 minutes and ended with a candy.

Careers360:  Did you appear for selection procedures in other B-schools as well? How was it different from that of IIM Lucknow?

Tanuj: I appeared for IIM-K and SPJIMR apart from IIM Lucknow. The IIM-K interview was similar to IIM Lucknow interview, but it was more along the lines of a stressful interview.

Careers360: What was your WAT topic and how did you structure it? Did you find it easy?

Tanuj: My topic was Net Neutrality. It was an easy topic as it was very much in news at that point of time.

Careers360:  How should one approach a WAT topic, if s/he does not have any knowledge about it?

Careers360: What must be the approach for WAT? What are the do’s and don’ts that a candidate should keep in mind?

Tanuj: There should be a structure for the WAT and clear points should be written on both sides of the argument.

Careers360: How was your personal interview experience? How big was the panel and what were your feelings while facing them?

Tanuj: The panel consisted of 2 people and they were very friendly to me.

Careers360: Among all the interviews you have appeared in, which one was the best and why?

Careers360:  What were the questions which you found most tricky? What was your response to them?

Tanuj: The interviewers asked me - “Why do want to do an MBA when you are already earning a salary that is comparable to one you will get at IIM?” My answer revolved around the long-term benefits and how I can leverage the strong alumni network at IIM.

Careers360: Quite impressive! What factors or qualities, according to you, are sought by the PI panel in a candidate?

Tanuj: I think the most important factor for clearing the PI is “the clarity of goals post MBA”. If one is sure about what he/she wants to achieve through MBA and that is articulated to the interviewer, then the rest of the interview should be a cakewalk.