Dr. Nitish K. Sengupta, Chairman, Board for Reconstruction of Public Sector Enterprise was the Chief Guest for the occasion. This is one of the rare occasions for MDI as the Chief Guest this year is one of its former Chairman. In his Convocation Address, Dr. Sengupta exhorted the students to maintain pace with the changing times as globalization is an irreversible phenomenon. As managers our aim should be ready to learn, unlearn and relearn. According to him, the current economic scenario is a chance for the Indian Industries to convert the constraints into opportunities and make their products and services more competitive.

Shri Atul Kumar Rai, Chairman, MDI Board of Governors in his welcome address commended MDI for providing an enabling environment for nurturing talent, excellence and innovation and global networking to the faculty and students allowing them the much needed opportunities for sharing experiences and adopting best practices.

In the Director’s Report, Prof. Mukul Gupta shared some of the major initiatives and achievements of MDI during the year.  He stated that MDI played a significant role in the growth and development of society by way of equipping its students with requisite knowledge and skills and above all the right values to take up their managerial roles in the corporate world.    He highlighted the first of its kind initiative taken by MDI in reaching out to the community by setting up the International Summer University (ISU) through which 40 top ranking international students and an equal number from Indian Universities would study together at the MDI Campus. At MDI, Prof. Gupta said, “we are attempting to define an Indian identity and model of business management education that is being shaped by a range of environmental characteristics that clearly differentiate the Indian scene as compared to the American or western scene”.

A placement at MDI is considered as one of the important parameters of its performance.  Of the 312 post-graduate students seeking placement, 295 have already signed up for their jobs against 305 job offers from 151 companies. Of these, 75 were new recruiters indicating the growing interest of companies in selecting students from MDI.

The convocation was attended by around 1500 people, including distinguished guests from government, corporate, diplomatic missions, people from the media and the proud parents & family members of students. A highlight of the event was awarding of the medals to meritorious students for their outstanding performance indifferent programmes. 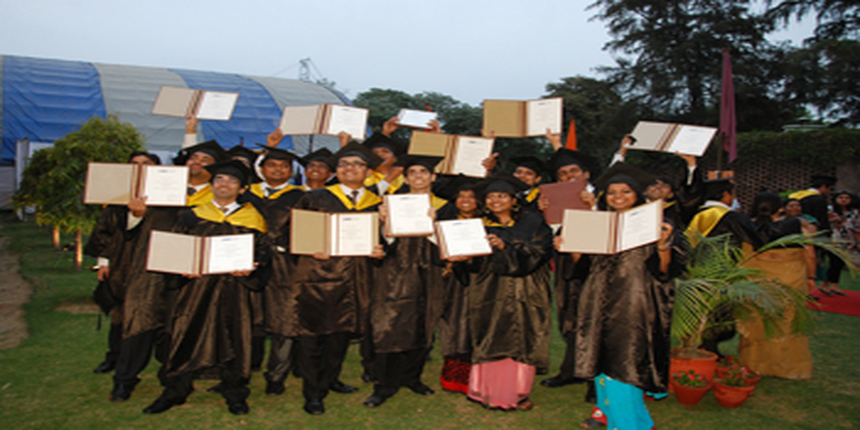 Established in 1973, MDI is one of the leading B-Schools in India known for its academic excellence, high-quality research, high-end executive education and internationalization. MDI has the distinction of being the first triple-crowned   Indian B-School  have global accreditation   of  AMBA (UK),  regional accreditation of SAQS and national accreditation of NBA. MDI has plans to grow by maintaining its leadership position in its current activities and through geographical expansion and internationalization.

To know all the aspects of admission details of postgraduate p...

If you want to do Diploma in Forensic Medicine then it will take upto 1 year.

If you want to pursue undergraduate course,BSc in Forensic Science then it will take 3 years to complete your BSc.

Here are the top Forensic Science colleges in India:

I hope this helps

FMS, MDI, NMIMS, XLRI, JBIMS, SPJIMR, current batch academic profile ike How Many students study in these colleges who score 71- 80% or 81-90% their 10th 12th and Graduation

You do have a great number of students having an average academic record in the above Top Management Institutes as well as at IIMs. Some even have a Poor Graduation Score, but again they have the qualities and communication skills to impress at an interview and perform brilliantly in CAT, XAT, NMAT and other Top MBA Entrance Examinations, to overweigh their Poor Past Academic Record.

Is it possible for one to get admission to MDI Gurgaon only with CAT? What are the other necessities required for one to have to get into MDI? Could you also tell about their placements?

MFI GURGAON is on if the top notch B SCHOOL UNDER PRIVATE CATEGORY. The college has attained a high ranking in the too B school list of India and has maintained its position because of the placements.

The admission into the college is done on the basis of

On the basis of above a composite score is calculated and students meeting the cut off is given admission.

The placement of 2021 has shown increase from the last year summing to around 22 lakhs as the average salary. The highest package was 44 lakhs.

The college offers 100% placement to its students.

It is one of the best B school in India.

which one should i choose b/w mdi murshidabad and imt Hyderabad. please suggest which will provide me good future growth

You have not mentioned any particular subject which you want to pursue, I am giving you example of PGPM course.

For that I will suggest MDI MURSHIDABAD between these two.

MDI Murshidabad offers 2-year PGPM course. It is listed under the top five emerging B-schools category by the NHRDN –survey. It is a member of the prestigious Association of Management Development Institutions in South Asia (AMDISA). The PGPM 2017-19 batch achieved 100 percent placement in record time. The highest package of 12 LPA and the average salary of 9.05 LPA, which was higher than the previous years. It was awarded A* (A Star) at National level and A*** (A triple star) at State level by CRISIL, a premier rating agency.

Hope this helps you

Feel free to ask any questions

All the best for your future

Mdi murshidabad and iiswbm which would be better

Both the colleges that you have mentioned above are excellent in their own way. They both have certain qualities that add up to their reputation. Now, if you are looking forward to select a college in between MDI Murshidabad and IISWBM then there are a few pointers that you must keep in mind:

2. Campus Infrastructure - Both the colleges have beautiful campuses with all the necessary facilities and equipment maintained for the students. MDI Murshidabad is known for its state-of-the-art infrastructure with E-Libraries, hostel facilities, mess, cafeteria and lots more. IISWBM, on the other hand is known for its traditional buildings and cultural value grounds.

3. Faculty - Now in both the cases, the faculties are top notch. There are outstanding professors and support staff to help out the students in the their educational journey.

If you ask me, it is my personal opinion that MDI Murshidabad is a slightly better option in comparison with the IISWBM when the packages are compared. But on the other hand, IISWBM stands strong on its age old reputation and excellent educational background. I would suggest that you tally all these factors and then decide. All consider the facts like location, fee structure, ROI and curriculum differences before you take a decision.

Check out these links for more information: https://www.careers360.com/colleges/management-development-institute-murshidabad

Hope this information helps you in making an informed decision.

Your MDI Gurgaon brochure has been successfully mailed to your registered email id .