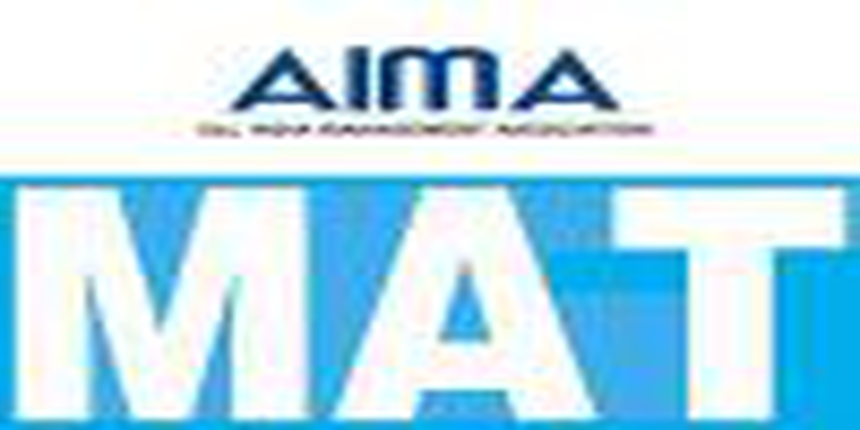 MAT December 2015 - MAT is the MBA entrance exam conducted by All India Management Association- AIMA for over 500 B-schools across India. MAT is conducted four times a year in both paper pencil as well as computer based mode in the months of February, May, September and December. AIMA has conducted the MAT December 2015 on December 6 and 12, 2015 respectively. The results have been announced on December 21, 2015.

Latest: MAT 2016 September test will be conducted on September 4 and 10

“Shortlist the B-Schools before they shortlist you. Predict your college with our MAT Pathfinder Tool”

MAT 2015 Eligibility: The candidates had to be graduates in any discipline from a recognized university. Final year graduation students could also apply for MAT December 2015.

MAT 2015 Application Procedure: The candidates could apply  either in offline mode or online mode for MAT December 2015 . In the offline mode, you have to obtain the MAT Bulletin and CD from listed branches of Axis Bank, Bank of Baroda and AIMA Study Centre. The last date to purchase the application forms was November 21 and the last date to submit the same was November 24, 2015.

MAT 2015 Exam Pattern: MAT 2015 was held in both paper pencil based form as well as computer based form. The duration of the exam was 2 hours 30 minutes. There were 200 multiple choice questions divided in 5 sections, Language Comprehension, Data Analysis and Sufficiency, Mathematical Skills, Intelligence and Critical Reasoning and Indian and Global Environment. Each correct answer bears 1 mark and for each wrong answer, there is 1/4 negative marking. The  exam was conducted on December 6 and 12 in paper and computer based modes, respectively.

MAT  2015 Selection Process: The candidates would be shortlisted by the MAT 2015 participating B-schools on the basis of their scores depending upon the cutoff. The candidates have to appear for the Group Discussion, Personal Interview and or Written Ability Test (WAT) rounds.

MAT December 2015 Important Dates: The exam related dates are provided in the table below:

MAT 2015 Admit Card: The admit card of MAT 2015 for December were available for registered candidates only, from November 28, 2015.

MAT Selection Procedure 2020 - Know the details of the selection procedures and qualifications fo...

May Cutoff 2020 - AIMA will release the MAT February 2020 cutoffs for admission to the management...

mat cutoff for iem Kolkata ???its a good choice for MBA or Doon business school?

The cutoff for IEM Kolkata is 60%, the infrastructure is good and basic facilities are provided. Regarding placement record almost every student is placed and there is 100% placement,  but the package offered is not good. Average salary package offered is as low as 5 LPA.

On the other hand Doon Business School,  the infrastructure is average but good facilities are provided. Placement record of college is good with about 90% of the students getting placed and package ranges from 5 to 15 LPA.

So personally I think Doon business school is better

How to get admission in christ University in management quota or with may mat score?

No, Christ University does not have any management quota for MBA. It is, however, recommended that you speak to the admissions office once for the confirmation.

Hope this would help,please feel free to ask if you have any further queries.

If you're targeting very good colleges than a score of 99+ percentile will fetch you get colleges with best ROIs.

Going a little below than 90+ percentile is you can get a few below average colleges also.

Going below this is not recommended.

Although you can visit the below link for more details:

what is the cutoff for pumba University through mat score

HELLO NARESH
SInce the official cut off are yet to be announced but we have the following data of the cutoffs for pumba university through MAT
DEPARTMENT OF MANAGEMENT SCIENCE, SAVITRIBAI PHULE PUNE UNIVERSITY - [PUMBA], PUNE - CUTOFF DETAILS 2019

View All Questions
Have a question related to MAT ?

Your MAT brochure has been successfully mailed to your registered email id .