The Day 1 of MAH CET 2015 has been concluded on Saturday, March 14, 2015. The exam pattern has followed the usual pattern. As per the test takers and experts, the difficulty level of the paper has been termed as very easy. Let us have a look at the analysis in detail.

This is the second year of the computer based test. According to some candidates, there were slight glitches in the exam in terms of technical aspects, interface and navigation system. Some wrong questions, misprint and erroneous options have also been reported. 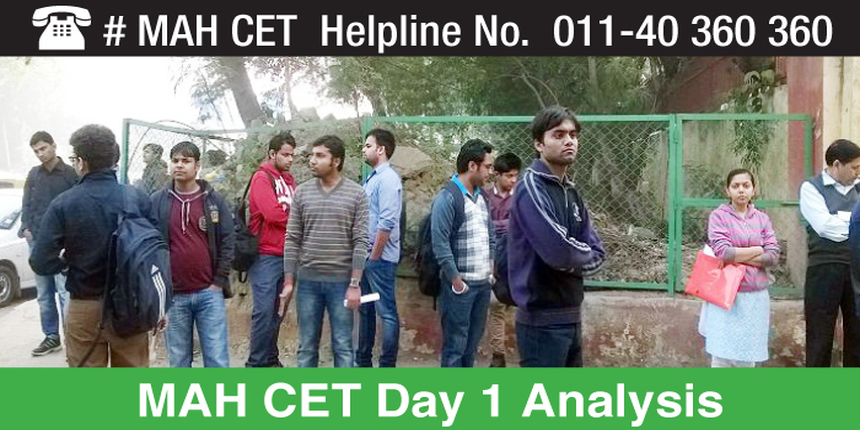 The exam structure is given in the table below.

Now we will take a detailed look at the area wise analysis.

There were around 40 questions in this section. The difficulty level of this section ranged from easy to moderate. The topics in this area included Arithmetic, Algebra and Geometry. While there were 10 to 15 questions from Arithmetic and Algebra, Geometry questions were 3 to 5.

The other topics included grammar, vocabulary, parajumble, Fill in the Blanks, Synonym/Antonym, Active/Passive Voice, Error Correction etc. Some Verbal Reasoning questions were also there which were quite easy. This included questions like Sequence Arrangement, Cause Effect and Odd Man Out.

The Data Interpretation and Data Sufficiency area had around 10 questions of easy to moderate level of difficulty. The questions were Set based and calculation intensive which made it time consuming. There were 2 DI sets. While one was on Line Graph, the other one was Table based. According to a test taker Anand Prakash, the questions in the Table based Set were quite vague in nature.

This area had around 60 questions including the topics of Visual Reasoning, Arrangement, Puzzles, Syllogisms, Directions, Arrangements, Blood Relations, Numerical and Alphabetic Series. Like the other areas, the questions of this area too were quite easy in nature.

Overall, although the exam was not that time consuming, owing to the overtly low difficulty level, the MAH CET 2015 Cutoff is expected to be much higher compared to last year.