Jaipuria Institute of Management, Noida organised its 3rd Jaipuria Annual Management Conference (JAMC-2013) on December 13 and 14, 2013. The theme was ‘Resurgent India: The Path of Globalization’.

Shri Yashwant Sinha, MP (Lok Sabha) and Chairman, Parliamentary Standing Committee on Finance was the Chief Guest during the Inaugural Session on Dec 13, 2013 along with Sudhir Jalan, Chairman, Sharad Jaipuria, Vice chairman, Shreevats Jaipuria as the guest of honour as well as a gamut of learned speakers as well as dignitaries from government, industry and academic background and various other sectors. 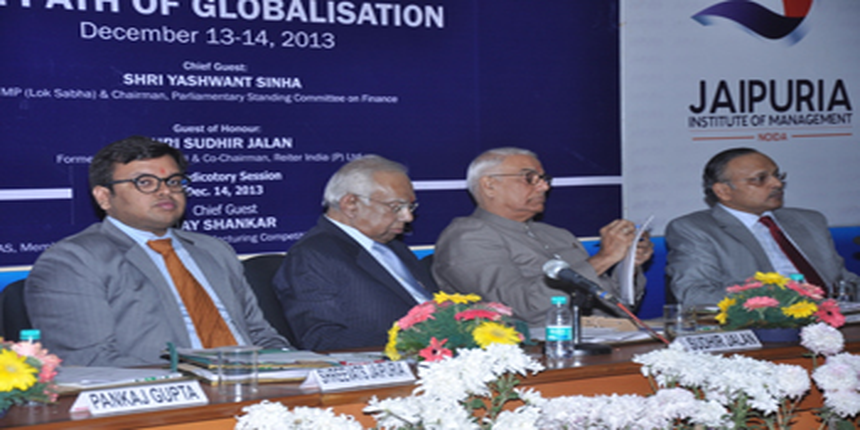 The inaugural session was intended to give a boost to the plethora of immense knowledge, and learning coming all the way across the two day long conference and to analyse and understand the various concerns for businesses in the changing environment.

After the ceremonial lightning of the lamp, Director Rajeev Thakur introduced the theme of the conference after which Sharad Jaipuria addressed the gathering through which he emphasised the significance of globalisation for our country followed by Mr. Sudhir Jalan’s speech in which he encouraged the youth to go one step beyond being made in India and come up with business models that are Designed in India and Dreamt in India.

The vote of thanks was delivered by Sharad Jaipuria who appealed the students to make the best use of the conference by understanding the insights of the different management paradigms and practices that are being aimed at globalisation. As the session reached its end the distinguished guests were honoured by presenting mementoes as a gesture of gratitude.

JIM’s Placement 2019 - Know all the details about placements a...

Jaipuria Institute of Management has announced the admission f...

Jaipuria Institute of Management Noida has announced the admis...

Dear aspirant, HBTI is a state government organisation. Compared to Jaipuria college the placement records & fee structure of HBTI is far better. Also the courses versatility is also high. It simply depends for what degree you want to go for. You can check the details of Jaipuria on the website https://www.jaipuria.ac.in/campuses/jaipuria-lucknow/

Compare the results and go ahead accordingly.

Hope you are doing well. As per your query yes Jaipuria Institute of Management, Noida provides MBA course and is ranked 63rd and the programmes offered are in the streams of Business and Management. Please click on the link below for more information and updates. Hope you find this helpful.

st. Xavier ‘s mumbai is definately a better college to study than st. Xavier’s ranchi. The college has excellent facilities and infrastructure and the faculty is also very good. The only problem is that admission in this college is quote difficult as most of the seats are reserved for christians. But if get into it You should surely not leave it.

which is better for PGDM jaipuria or PIBM

Hello.
pibm is quite better than PGDM jaipuria in terms of placement, acadamics,  industrial visit etc. but  NIRF ranking of PGDM is quite good than pibm, in terms of all facilities like infrastructure and basically goes for placement you should prefer pibm, the placement is not too much high but you can expect more than PGDM jaipuria.
Best of luck.
Read More
Answer

which college will be good for mba? Jaipuria noida /isbr bangalore/j k business school/alliance/RCM bangalore please suggest me ? which one should i choice

Dear Sayan Das, If you are looking for a master's which is industry focused, gives you ample exposure to work place, provides experiential learning through live projects, workshops, internships ,Corporate interactions and Corporate mentorship, ISBR Business School, Bangalore is a good option to consider. You may connect with ISBR on 93792 66660. Best Wishes, Kavitha Madhusudan, Director Admissions

Your Jaipuria Noida brochure has been successfully mailed to your registered email id .