To commemorate the first death anniversary of Dr. Verghese Kurien the founder of Institute of Rural Management Anand (IRMA) organised a get together of Faculty members and students on Monday, September 9, 2013. 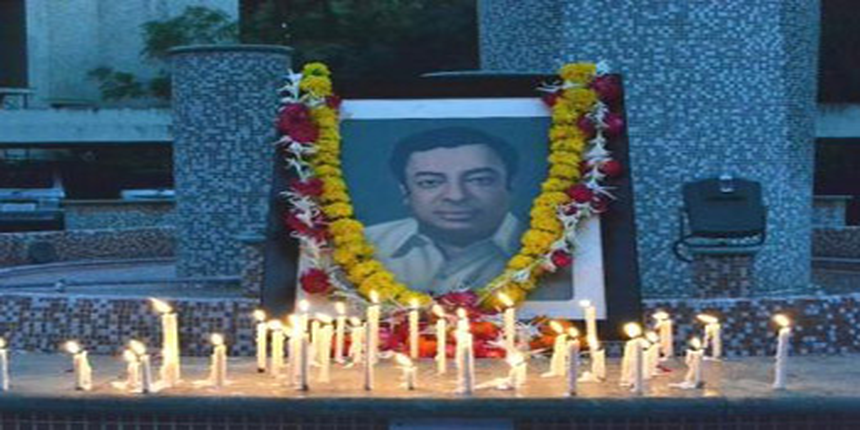 The memorial ceremony began by lighting of candles near the AMUL Caillon Chimes followed by a speech from Prof. Debiprasad Mishra and Prof. K. V. Raju in remembrance of the architect of the Milk Revolution in India.

Ms. Nirmala Kurien, daughter of Dr. Verghese Kurien also graced the occasion. Remembering her father, she said, “Dr. Kurien loved the IRMA campus, the birds chirping and above all the students of this great institute. He always felt privileged to be a farmer’s worker.”

In his speech, Prof. K V Raju said, “Dr. Kurien used to say that always plan big. Never plan small else you would not regret a loss. Students who come to IRMA are a part of Dr. Kurien’s dream.”

Prof. Mishra said, “After 25 years it would be difficult for us to imagine that a guy of Prof. Kurien’s stature walked the streets of Anand.”

Dr. Verghese Kurien was a renowned Indian social entrepreneur and is best known as the ‘Father of the White Revolution’, for his 'billion-litre idea' (Operation Flood) — the world's biggest agricultural development programme.

He founded around 30 institutions of excellence (like AMUL, GCMMF, IRMA, NDDB) which are owned, managed by farmers and run by professionals. IRMA was set up in 1979 with a mandate to professionalise management of rural producers' organisations and create a body of knowledge in the field of rural management. Within a short time-span IRMA came to be recognised as a premier centre of teaching and research in rural management.

Know all about the placements of IRMA for the batch of PGDRM 2...

I am a graduate in BVSc &AH with CGPA of 7.3. currently i am working in cooperative sector named as Sangam dairy.I had a work experince of 28 months in cooperative dairy sector.On which percentile of CAT and XAT I get a call from IRMA. And what are my chances of selection after i get a call

The cutoff for general category admission in IRMA remains the highest with 85 percentile in both CAT and XAT.  IRMASAT is conducted for admission to PGDRM program. The cut off scores of IRMASAT and CAT/XAT are released separately.
Shortlisted candidates will be called for selection process at IRMA where they will have to take the IRMA Social Awareness Test 2021 (IRMASAT), Group Activity and Personal Interview.

Based on your scores in all the listed examination, you will be selected with your final percentage aggregate calculated at the end.

Will IRMA accept students in the campus for the current year PGDM(RM) 2021-23 program?

I hope you are doing good. I would glad to inform you that application forms of many buisness schools has been postponed due to the lockdown which includes IRMS also . Take it as your golden period as you got time extension for gd and pI .

For now ,applications forms  has not relaeased but will be released very soon for 2021-2023 program

Hope you found this answer helpful. Good luck for your future

Please provide me with the details of refund policy of IRMA. I have been selected for IRMA and I havent received any reply from their admission committee. Thanks in advance!

The IRMA refund policy states that if IRMA recieves information about the widthrawal of a student from the programme,before the induction programme starts, they will fine 1000/- rupees from the fees,and return the rest of the fees.

IRMA Refund Rules of PGDRM40 (2019 – 21) will be applicable if the student withdraws after joining the Induction Programme.

I hope it helps,

Does Institute of Rural Management (IRMA), Anand accept freeship card? I am a girl from gujarat belonging to SC category.

Institute of Rural Management Anand is an autonomous institution and premier business school located in Anand Gujarat, India with the mandate of contributing to the professional management of rural organisations.

Yes,they do accept have similar facilities like the freeship card for the poor applicants.

The financial assistance that is provided by the University are :

Scholarships for SC / ST Applicants : It covers the entire cost of education of SC / ST applicants are available at IRMA. The Ministry of Social Justice and Empowerment, Government of India has allocated four scholarships to IRMA for SC participants. The scholarship covers fees, non-refundable charges, lodging and boarding expenses, and cost of books, stationery, and personal computer ( http://www.socialjustice.nic.in ).

Tuition Fee Waiver Scheme and Fee Exemption : The Tuition Fee Waiver Scheme, as per the AICTE rules, is available at IRMA. IRMA also firmly believes that no one should be deprived of education for lack of financial resources. Hence, IRMA is open to providing financial assistance to meet the PRM tuition fees of extremely poor applicants. Participants can request for Exemption only after joining.

CAT percentile is 83.93. Can i be shortlisted for GLIM, GIM, TAPMI, IRMA,BIM or KJSIMR?

If good profile, yes, you do have chances for some like GL

Your IRMA Anand brochure has been successfully mailed to your registered email id .