CMAT 2016 Result Analysis: Why CMAT score cutoff may be higher for MBA admission in 2016?

With high scores in CMAT 2016 result, B-schools might raise their cutoff for the MBA admissions this year. The CMAT 2016 result data released by the exam conducting body- AICTE suggests that given a similar score cutoff, B-schools this year will have a larger pool of candidates to select from. 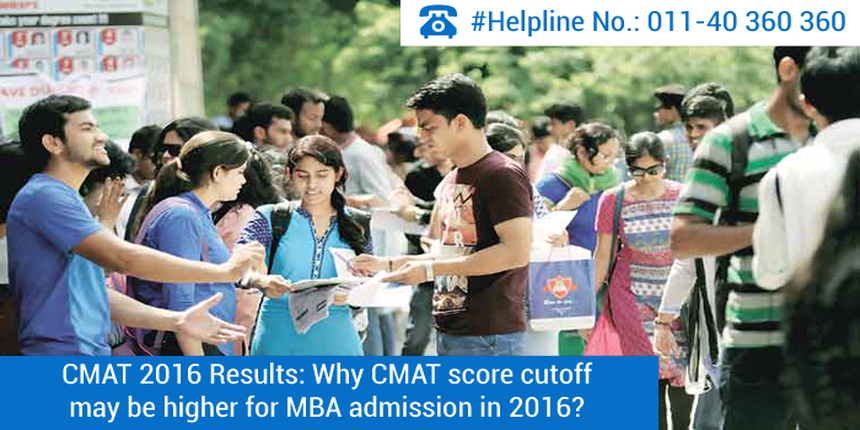 Careers360 had earlier reported about the high scoring trend in CMAT 2016 result, leading to lowering percentile.

Cutoff may increase significantly at B-schools

While CMAT takers might be cheering on their high scoring, they are in for a tough time as B-schools may go for higher cutoff scores this year; thanks to the availability of larger pool of candidates at their last year’s cutoff scores.

Thus, the availability of a larger pool of candidates at last year’s cutoff may prompt B-schools to raise the bar and revise their cutoff to a higher level.

Careers360 brings you different CMAT cutoff scores with number of candidates available at those cutoff scores:

The B-schools will declare the shortlist of candidates on the basis of the CMAT cutoff and the admission criteria of the institute. The shortlisted candidates will have to appear for the Group Discussion (GD), Personal Interview (PI) and or Written Ability Test (WAT). The list of the finally selected candidates will be notified either on the website or the students will be sent call letters for admissions.

This year a total of 55,084 candidates took CMAT exam for admissions to more than 1000 MBA colleges accepting CMAT scores for their admissions. Last year, a total of 57,700 candidates took CMAT in February. In 2014, a total of 88,942 MBA aspirants took February CMAT. Till 2014, CMAT was conducted twice a year- February and September. Since the year 2015, September CMAT was scrapped. Careers360 CMAT 2016 analysis of last 3 CMAT merit list reveals that score of AIR is falling consistently.