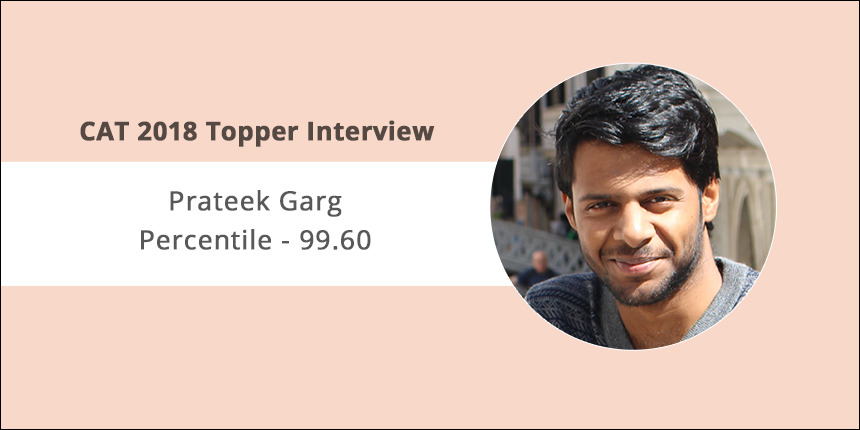 CAT 2018 Topper Interview - Topping a competitive exam like CAT where more than two lakh candidates compete for a few thousand seats doesn’t come easy. Prateek Garg, an IT professional who topped the CAT 2018 exam with 99.60 percentile, believes that any competitive exam is all about consistency and discipline. In a conversation with Careers360, Prateek reveals that he never thought he would top the exam but consistent practice and keeping his calm on the exam day worked really well for him. A B.Tech in Computer Science, Prateek has been working as a Software Developer after completing his graduation in 2016.

Prateek belongs to a middle-class family from Lucknow and wants to pursue his career as a Business Consultant in a top IT firm and even believes that he will have his own firm one day. Read his entire interview as he reveals his CAT preparation journey.

Careers360: Congratulations on your CAT 2018 result. What was your reaction after checking the result? Did you expect this?
Prateek: Thank you so much. Well, to be honest, I wasn’t expecting such percentile at all. I knew I had prepared well but still was not able to cover all my weak areas, so I was expecting something around 98 percentile.

Careers360: Please tell us something about yourself - Background, College, course, parents’ occupation, work experience etc.
Prateek: I happen to be from Lucknow, having done my schooling and college both from here itself. I studied in City Montessori School Chowk Branch and did my B. Tech (2012-16) in Computer Science from BBD NITM (affiliated to AKTU formerly UPTU). My father, Mr. Anil Kumar Agarwal runs a general merchant shop and my mother, Mrs Anshu Agarwal is a homemaker. I have a younger sister who is a B. Com Hons graduate from SRCC, Delhi University. I have been working as a software developer for the past 2.5 years and now the calling to take my career to the next level and pursue MBA, made me write the CAT exam this year.

Careers360: How was your exam day experience?
Prateek: It was like any other day to me. I had my exam in the afternoon slot, so got a chance to have a good night sleep. I am a firm believer of the fact that the less stress you take on the day of the exam, the better are your chances to ace it.

Careers360: How did you prepare for CAT 2018? When did you start preparing? Please share your step by step preparation journey.
Prateek: My CAT 2018 preparation started since the first time I wrote CAT in 2015 during my final year of engineering. I always wanted to do MBA but only after having some relevant work experience in the IT industry. So, I used to fill the form and then write the exam without studying for it. I did this for straight three years without studying for it at all and interestingly I always got the same percentile, around 89. This helped me to be always familiar with the exam so that I am not surprised on the day when I really go after preparing for it. Then, after the results of CAT 2017, I decided to write CAT 2018 with some serious preparation. I had enough work-ex behind me and now I felt I was ready for it. I started preparing for it around mid-March. I did not know what I was up for but all I knew was, that I want to do it. Also, as I was working for a software firm, I had my commitments there too. The key thing was time management for me. I joined coaching in Lucknow – Team Satyam, where they were having classes in the morning from 6:30-8:30. I enrolled for that batch. So, my schedule used to be something like, early morning classes then straight to the office from there itself, and then study for 1-2 hour after returning from work. I used to stretch myself and cover up for the missed things during weekends as those days were off from the office. This continued till July till when almost all the basics were covered and then I took CL mocks and then every week until the last week before CAT, I gave a mock on Saturday and analysed it on Sunday and during the rest of the week I studied and worked on my week areas.

Careers360: How did you tackle your strong and weak areas?
Prateek:  My 3 years of writing CAT gave me enough data about my weak and strong areas. I knew that I do not even to practice RCs so I just did RC during the mocks and I practised VA sometimes. Throughout these 8 months, I had a laser focus on improving my LRDI score and increasing my accuracy and speed in QA. I kept doing this over and over again and I believe it somewhat paid off. So technically speaking, I prepared for 2 sections only, both in which I was lacking.

Careers360: Did you take coaching? How helpful was it? Is it possible to succeed through self-study?
Prateek:  Yes, I did enrol in coaching. It helped me a lot, more than helping me with brushing up my concepts, it helped me in having a routine which I could follow during the course of my preparation.

Answering the question on whether it is possible to succeed through self-study, so my take is yes, it is possible. As I said, more than helping me with concepts, it was the routine that helped me, so if you are a self-motivated person who can be disciplined enough every day without fail then you do not need coaching. Any competitive exam is all about consistency and discipline.

Careers360: What are the factors behind your success?
Prateek: The support of my parents has to be one of the topmost factors for my success. Along with them, my mentors at my coaching helped me a lot too, and the last but not the least, my friends and well-wishers who have always been there for my support whenever I needed them. They were those honest critics who told me when I was straying away from my goal.

Careers360: Did you file for objections against any question/answer based on the CAT 2018 answer key?
Prateek: No, I didn’t file any objection.

Careers360: What next? Preparing for GD/PI/WAT?
Prateek: So, the next big thing is to convert most of the interview calls and then be able to choose where I want to spend the next 2 very important years of my life. Yes, I’ve already started preparing for WAT-GD/PI.

Careers360: Which other MBA entrance exam have you appeared/appearing for?
Prateek: Apart from CAT, I’ve appeared or planning to appear for IIFT, SNAP, XAT, and TISSNET.

Careers360: Which is your dream B-School? After that, what career do you want to pursue?
Prateek: My dream B-school is IIM Bangalore (although sad because I am not expecting a call from them). I want to pursue my career as Business Consultant in a top IT firm and then who knows someday I end up having one of my own.

Careers360: Please tell us about your hobbies? Did you pursue your hobbies or other interests while you were preparing for the exam?
Prateek: I am a huge cricket fan and an avid reader of cricket. Yes, I made a point to take out time to watch my favourite matches. Being a huge CSK fan, it was very difficult for me to miss out on a few of their matches. Along with cricket, I also followed the FIFA World cup held in Russia. While in office, whenever I got some free time, I took my colleagues for a quick carrom-board match too.

Careers360: What were your relaxation and recreation methods you followed amidst preparation?
Prateek: I am a lazy person by nature, the best relaxation method for me is to sleep whenever I get time. Apart from sleeping, I like watching stand-up comedy and have also started watching The Big Bang Theory, loving it until now.

Careers360: Do you have any idol who you follow?
Prateek: No idol as such. I believe in learning from everybody, imbibing their qualities and following a righteous path for the betterment of all!