In what comes as a major source of dismay for B-School aspirants this year, the exam dates for two of the most sought after national-level postgraduate management examinations, the Common Admission Test (CAT) and the Indian Institute of Foreign Trade (IIFT) Test, are set to clash. As per the notification released by IIM Lucknow on July 29, one day before the previously expected date of July 30, the exam date of CAT 2017 has been fixed as November 26, 2017, which is incidentally the same date on which IIFT 2018 is scheduled to be held. It should be noted that the Indian Institute of Foreign Trade had released the notification for IIFT 2018 much earlier, on July 25, 2017. This marks the first ever instance where the CAT exam date is clashing with that of IIFT.

Latest Update: IIFT notifies on its official website that the issue is being resolved by the Institute. "The issue related to clashing of date of MBA(IB) Entrance Exam with CAT, is being resolved. You will be updated soon on the issue," reads the official notification. 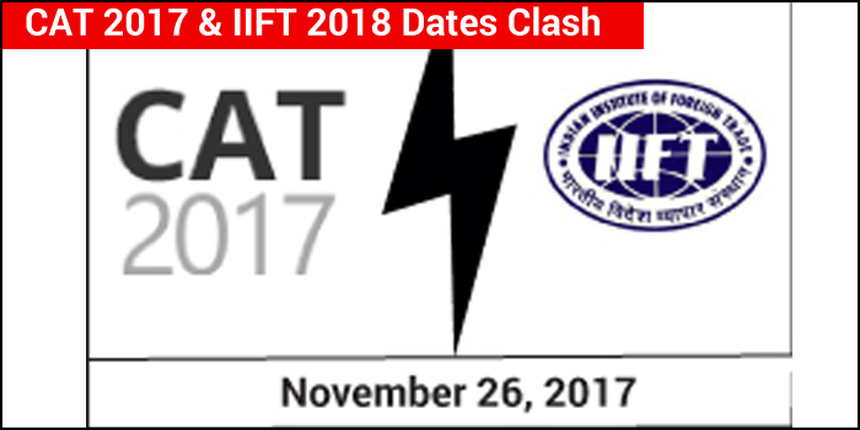 Based on last year’s CAT schedule, it was expected that CAT 2017 would be held in the first week of December. However, in being scheduled for the last week of November, it has reverted to the schedule most commonly followed for CAT before 2016.

Assuming the fact that the CAT 2017 date had been decided a long time prior to the IIFT 2018 notification, it can be seen that IIM Lucknow did not make any plans for changing the exam date at the last moment. IIFT Delhi, on the other hand, is known to conduct its entrance exam on the last Sunday of November every year.

Both CAT and IIFT entrances are two of the most sought after MBA entrance exams. Last year, around 1,95,000 candidates had appeared for CAT out of 2,32,434 applicants, whereas approximately 40,000 test takers appeared for IIFT. Although there is a huge gap in the number of test takers for each exam, there is always a core set of aspirants planning to appear for both and these will be the ones most affected.

While CAT is conducted by the IIMs for admission to 20 IIMs and over 100 B-schools, the IIFT entrance test is held for admissions to the MBA in International Business programme offered at the institute campuses in Delhi, Kolkata and Kakinada (Andhra Pradesh).

The following table brings to you an overall comparative analysis of CAT and IIFT exams.

CAT Vs IIFT– An Analysis

Careers360 has approached the exam conducting authorities, IIM Lucknow and IIFT but they are yet to respond to the matter (Update: Check IIFT statement above). Since IIFT had announced the exam date earlier than CAT, ideally it should be the IIMs who change the test date to safeguard the interests of MBA aspirants. A large number of test takers who will be appearing for CAT, will also be preparing to take the IIFT entrance test, and such a sitatuion will create a strong clash of interest. On the other hand, since the number of applicants and test cities for IIFT is much lesser, operationally it would be more convenient for IIFT to change the test schedule.

What if nothing gets changed?

Incase both IIM Lucknow and IIFT decide on sticking to November 26 for conducting their respective entrances, MBA aspirants will have to take a call. In this case, it is likely that CAT will be chosen by more aspirants given the better chance of admission and more number of seats offered in IIMs and other top B-schools. Harshil, an MBA aspirant shares, “I have planned to appear for both CAT and IIFT but in case the dates are not changed, I will obviously go for CAT.”

Aspirants who are serious about pursuing the specialisation of International Business should go for the IIFT entrance test.

Careers360 will keep you updated in case either of these test dates are changed by the authorities.

Stay tuned to bschool.careers360.com for more news and updates on CAT 2017.

Which B-schools will you get based on your percentile?

PI-WAT Experience: Since I was a fresher, panellists focused on my resume and GK, says Arko Biswas of IIM Raipur
View All Articles