CAT 2016 pattern: This can be a surprise element for you 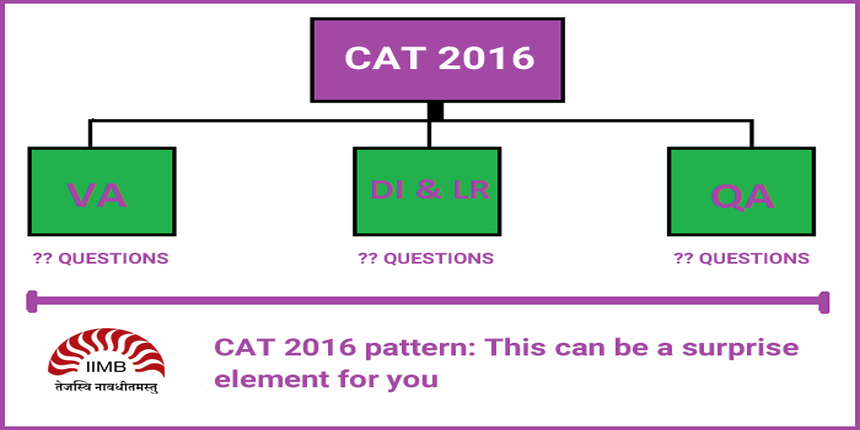 Despite having lot of speculations on CAT 2016 pattern change, the notification revealed the continuation of the previous year’s exam pattern, much to the relief of the aspirants. But still there are certain areas in the exam pattern which have ambiguities. For example, the section-wise and the total number of questions, which was stated in the CAT 2015 notification, is missing in this year’s CAT announcement.  CAT 2016 Convenor Prof. Rajendra K Bandi also kept this undisclosed in his interview with Careers360.

Despite the announcement of CAT 2016 exam pattern and structure, there are certain caveats related to the number of question and the order of the section in which students have to answer. In CAT 2015, the number of sectional questions was defined as 34 each in Quantitative Ability and Verbal & Reading Comprehension, and 32 in the Data Interpretation & Logical Reasoning. However, this year the number of questions in each section has not been pre-defined, indicating to possible surprise elements during the actual test on December 4.

To have an overall idea, let us have a look at CAT 2016 Test pattern

Last year, CAT was announced with major changes in terms of its pattern along with other additions. The overall structure of the test will remain this year too. Though Prof. Bandi said that CAT 2016 pattern would be similar to last year, he refused to disclose the section-wise numbers. “The number of questions varies and cannot be disclosed,” Prof Bandi said, adding that he wanted to retain the positive changes made in the Cat pattern last year.

According to the exam pattern, the non-MCQs or questions without any answer choice would be present this year as well. However, the exact number of such questions per section has not been defined, like last year.

Not only the numbers of sectional questions are not defined this year in CAT, the order of attempting each section is also missing. It is likely that the order will be similar to that of last year’s CAT. The order in which test-takers had to attempt the sections last year is as below:

The FAQ section of the official CAT website, however, states that there will be a pre-specified order for the candidates to follow this year as well.  According to experts, an official tutorial on CAT 2016 which will be released on October 18 might bring more clarity on exam pattern. For now, an official FAQ on CAT exam format conveys that candidates may have to stick with last years’ pre-defined order while recording their response for different sections.

Q: Is there a specific order for answering sections? Can I attempt sections the way I want?

A: You must answer the sections in a pre-specified order and this order will remain same for all the candidates.

CAT 2016 is scheduled to be held in 2 slots on December 4, 2016. The application process which started from August 8 will end on September 22. The admit card will be released on October 18 along with a tutorial. The result is expected to be declared on the second week of January 2017.

Stay tuned towww.bschool.careers360.com for more news and updates on CAT 2016