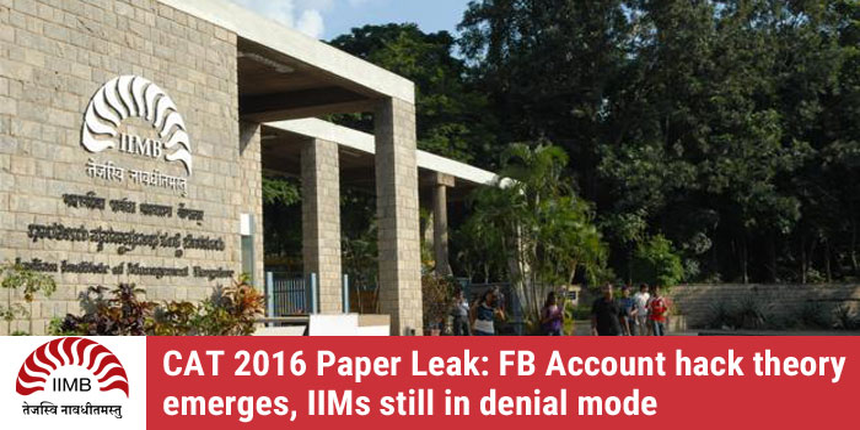 After two days of CAT 2016 paper leak, the candidate who allegedly shared questions on Facebook has said that his social media account was hacked and abused for leaking CAT questions. Meanwhile, the Indian Institutes of Management (IIMs) which conducts the test is still in denial mode with CAT 2016 convenor terming the leak as “one incident of malpractice”.

The questions of second session of CAT were leaked on social media platform Facebook while the test was still on. Careers360 has already reported on this. Know how the CAT questions were leaked during CAT test hours by clicking on the link.

The Facebook account where questions appeared first belonged to a test taker who was undertaking CAT at a test centre in Bengaluru. However, the same candidate lodged an FIR saying his account was hacked and abused.

Naga Venkata Viabhav Saladi who allegedly posted CAT 2016 questions from second session of the exam on December 4, shared with an education portal that CAT paper leak said allegations against him were completely false. He further said that he also came to know about the leak only after he got a call from CAT convenor. According to the candidate, he lodged an FIR soon after failing to access his Facebook account.

Despite the social media timelines making it evident that CAT 2016 questions were indeed leaked, IIMs have chosen to remain in denial mode. Ironically, they are also claiming that “The CAT 2016 Exam concluded successfully on December 4.”

The exam officials suggested that the leak was an isolated case and “nobody's rightful expectation of doing well in the examination has been harmed."No candidate has been put to any disadvantage because of this particular incident,” CAT 2016 Convenor Prof R K Bandi told Careers360.

Experts, however, believe that the leak of questions reflects the poor management of IIM-Bangalore which was entrusted with conducting CAT on behalf of all IIMs. “I am told by my students that there were lapses on security checks at many centres and conduct of invigilators was unprofessional,” said Arks Srinivas, CEO, VistaMind.

Many experts also believed that the leak of questions during the test might have helped one or a group of candidates to cheat in the exam. They also contradicted the claim of IIMs that “the integrity of the Test has not been compromised in any manner.”

“Of course, the answers could come into the exam hall through the same route that the questions went out,” believed experts from T.I.M.E. coaching institute.

CAT 2016 was taken by about 1.95 lakh candidates out of 2,32,434 applicants over two sessions on December 4, 2016. The overall difficulty level was the test was moderate to tough. DI & LR was the toughest section followed by Quantitative Ability. Verbal and Reading Comprehension was the easiest section. Compared to last year, the number of non-MCQs have reduced in CAT 2016. While the total non-MCQs in 2015 was 32, this year it was 25.

CAT 2016 paper leak: This is how questions were leaked

Stay tuned to bschool.careers360.com for more news and updates on CAT 2016.

MY NEET PG 2020 rank is 9590. I am general cat student. Is there any possibility of getting a Derma seat at this rank?

I would like to tell you that you might get a seat and there are chances but obviously more chances would be if you participate in state quota counseling and choose dermatology there as your field of study in any one of your state government medical college.

I hope my answer helps.

The best coaching centres for CAT are as follows (it will be better if you specify your city requirement as every tier 1 city has good coaching centers for CAT):

my air is 6348 gen cat.Can i get MS obg in Andhra Govt colleges.

Going by previous All India cut offs and your rank, you may decent chances in Medical Colleges like:

Obstetrics and Gynaecology is tad difficult with this rank. Having said that, this is 2019 data and cut offs change every year depending on various factors such as no.of Candidates appearing for the exam, no.of Candidates qualified, difficulty of the exam, and no.of seats available for each specialisation. Please try our College predictor to check the possibility of other specialisations with you rank across India:  https://medicine.careers360.com/neet-pg-all-india-college-predictor

my rank in neet Pg 2020 general cat 32k nd in OBC it is 11k is there any chance of getting clinical subject in gov. colleges?

First of all congratulations on securing average rank in NEET PG 2020. As per your rank and previous year cutoff, you will get private colleges with this rank. The colleges you will get in clinical branch are:

There is a list of medical you will get as per your rank. Hope this helps!! You can also go through our college predictor link: https://medicine.careers360.com/neet-pg-college-predictor

Hi aspirant,
IIMs are known to raise their bars of the expected percentile in the examination. The general bracket of the accepted CAT percentile ranges from 95 to a 99.98 percentile so as to get you a PI, that is, a Personal Interview call from the IIM institutes. In regard to this they also consider 12 and 10 class marks and grade them. With your score you have fair chances of getting a call from IIM ahemdabad but you have to clear analytical written test (AWT) and personal interview for admission. Follow this link for more details-
https://bschool.careers360.com/articles/iim-ahmedabad-cutoff/amp
Hope this helps.
Read More
Answer
Answer Later
Report