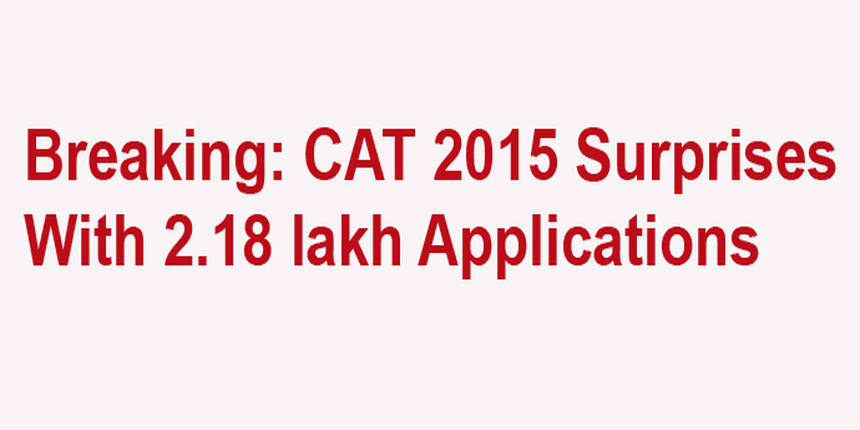 Defying early trends, CAT 2015 registration has closed with a surprising increase in the application numbers with a total of 2.18 lakh candidates registering for the coveted MBA entrance exam for admission to IIMs and many other top B-schools in India. Last year, the total number of applications was 1.97 lakh.

Experts suggest that the positive sentiments in markets and economy might be the key factor behind this revival in CAT numbers this year.  “MBA dream of aspirants are directly related to their perception towards economy. Today, people are more optimistic and job scenario has also improved which has already reflected in better placements at B-school campuses,” says Sandeep Manudhane, Chairman, PT Education.

With the extended CAT registration window closing on September 25, the IIMs record about 11 per cent increase in the total number of application this year. As per IIM officials, following is the pictorial representation of CAT 2015 application break-up (gender-wise):

The CAT 2015 Convenor Prof. Tathagata Bandyopadhyay had earlier shared with Careers360 that he hoped to get over 2 lakh registrations. “Last year, there was an extension of CAT registration for 1 day and the number increased by 7,000. With the same ratio, we are hoping that by extending the application by 5 days, even if we receive around 10,000 registrations each day, we will get around 2 lakh applications.”

Although it was predicted that the total number of registrations would not be more than 1,70,000 and that the entry to IIMs would be easier, the aspirants should now brace themselves for a tough competition.

The following table will bring to you the total number of seats and the ratio of seats available per 1000 candidates.

While the original application deadline for CAT 2015 was September 20, the window was extended for 5 days, till September 25. CAT 2015 is scheduled on November 29 in 2 slots. The Admit Cards will be available for download from October 15, 2015 onwards.

You have secured a good percentile in CAT exam. After the declaration of the CAT result the merit list will be made  to call the candidate for the interview round and WAT Test. The merit list comprises of your CAT percentile, your graduation marks, your work experience, your 10th and 12th marks. To get into top MBA college like , IIM Ahmedabad you need to score above 99.7 percentile in CAT exam. As you have secured 89.49 percentile you will get call for MBA course from

You will definitely got a acall from IMI Delhi and IMT Ghaziabad.

To know more about the colleges you get you can also use careers360 college predictor link given below: