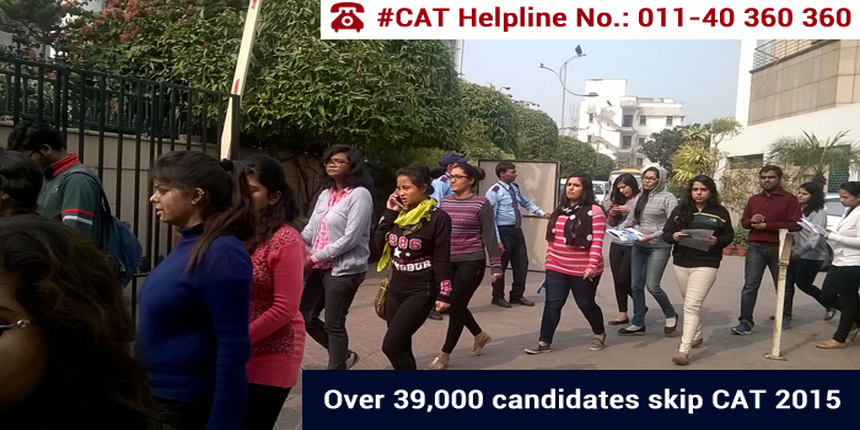 The following infograph brings to you the number of total registrations and the actual test takers over the past few years.

As per the numbers shared by the CAT 2015 Convenor Prof. Tathagata Bandyopadhyay, 1,21,291 candidates were male and 58,270 candidates were female out of 1,49,488 and 69,176 registrations respectively.  Around 50% of the registered transgender candidates had appeared for the test, numbering to 41 out of 80.

Although CAT is popularly known as an engineer friendly test, this year the CAT authorities had introduced major changes in the pattern in order to make it more conducive for the test takers from educational backgrounds other than engineering.

As per the information, a total of 883 Differently Abled (DA)/PWD candidates appeared for the test.

The increased number of registrations in CAT 2015 and the highest among past 5 years had pleasantly surprised the management education fraternity which allayed the fear of gradual MBA slot down. In fact, this year’s registration trend also showed marginal increase in number of female and non-engineering candidates.

Conducted by IIM Ahmedabad, CAT 2015 was held in a single day window in 2 slots across 650 centers in 136 cities of India. The overall difficulty level of the test was moderate to tough. Like last year, this year too there was no report of technical glitches. The scores of CAT 2015 will be accepted by 19 IIMs and over 100 B-schools across India.

Stay tuned to bschool.careers360.com for more news and updates on CAT 2015.

CAP 2020 - Know all the details about Common Admission Process 2020 like important dates, cutoff,...

All About MBA - Know all about Masters of Business Administration (MBA) courses, eligibility, adm...

How to prepare for GK section of CMAT, IIFT, SNAP and XAT?

How to prepare for GK section of CMAT, IIFT, SNAP and XAT – GK is an integral part of almost ever...

To add to your knowledge, You can take CAT examination in any year of your graduation, but only the CAT exam taken in your final year will be counted as  valid. You could also write it any time after graduation suppose while working. But thing here is there should be no break, means you should either be working in a company/startup or you should be studying a recognized degree.

To be honest, there's no use of taking CAT exam in second year. If you really want to go in best B-schools. It is advised to take CAT in the final year of your degree. For now the best thing you can do is to start preparing for CAT, know the syllabus for CAT before hand. You have enough of time to cover whole syllabus before CAT exam.

How long CAT , XAT and CMAT results are valid ? Is this possible to use(cat,xat n cmat) 2020 result after August , I mean for the next batch ?

Hello,
No, you cannot use 2020 result for the next session of 2021. For the new session you have to appear again for all the exams of cat, xat and cmat. With this years result you have to take admission in this year only.
Hope it helps. Thank you
Read More
Answer
Answer Later
Report
5 Views

how to prepare for an MBA college interview with 65% throughout 10+2+3 academic performance, no extracurricular activities and with no work experience if I really want to pursue MBA this year from a good college?

If you really need to pursue MBA, then you have to give really good performance in CAT, MAT, XaT etc exams should develop good communication skills which is really necessary for MBA.

You can also gives for an intership witch will gives you more value during the personal interview round and for your future.

But at most score 90 and above in CAT exam.