The Common Admission Test (CAT) is the most popular MBA entrance exam for admission in 19 Indian Institutes of Management (IIMs) and over top 100 B-schools in India. The highly competitive national-level exam, CAT brings with it certain surprises and controversies every year. For the academic year 2016-18, CAT 2015 was conducted by IIM Ahmedabad. Careers360 brings to you latest CAT 2015 updates with the timeline and detailed story links. 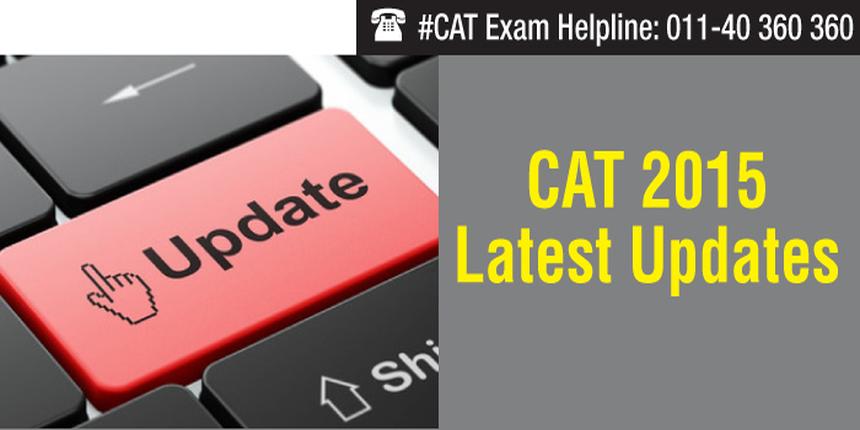 CAT 2015 Results: 9000 candidates score zero or negative
The CAT 2015 official results data available with Careers360 suggests that candidates who left their answer sheet blank came out with an overall 5.01 percentile. This means that any candidate with less than 5 percentile would have scored zero or negative scores. One of such candidates shared her text message with Careers360. “Dear Candidate, your percentile for CAT 2015 for application number 50003013 is 5.01,” read the SMS text received by the candidate.

IIMA says results not leaked: Indian Institute of Management Ahmedabad, which announced CAT 2015 via text SMS to registered mobile numbers of CAT takers today, has clarified that “CAT 2015 Results have not been leaked as reported by many media houses.” The officials also said that candidates have been intimated their percentile via text SMS and confirmed that the detailed scorecard will be announced which candidates will be able to download by end of the day on January 8.

The IIMs have released the CAT 2015 Mock Test which is a tutorial for candidates to understand the format of the CAT. Earlier the mock test was to be available on October 15 but was delayed for almost 2 weeks. It is vital for the CAT aspirants to work on the tutorials, to have a better understanding of the online examination process, to be conducted on November 29, 2015, across centers.

Although the original date of downloading the Admit Card was October 15, it has been postponed by 10 days, till October 25, 2015. The applicants can download the Admit Card from the official website, 1 pm onwards.

After an extension of the application deadline for 5 days, the CAT 2015 application process ended on Friday, September 25, 2015. No further extension has been announced.

The application process for CAT 2015 started from Thursday, August 6, 2015, 10 am onwards. The CAT 2015 official website has also launched the Registration Video and the step by step guide.

The official notification released on Sunday, July 26, 2015. Major changes in the exam pattern were announced by IIM Ahmedabad. Check notification for the other important dates and application procedure.

IIM Ahmedabad officials confirm that CAT 2015 will be conducted on Sunday, November 29, 2015. The official website will be launched on Monday, July 27, 2015, a day after the notification which is scheduled to be released on July 26.

CAT 2015 expected to be conducted on November 29; Application to begin on Aug 6

CAT 2015 conducted on Sunday, November 29, 2015. The test held in computer based format in 2 slots on the same day. The application window was opened for one-and-a-half-month beginning Thursday, August 6, 2015.

The CAT 2015 announced by IIM Ahmedabad on Sunday, July 26 with major changes in the exam pattern this year. CAT 2015 Convenor Dr. Tathagata Bandyopadhyay confirmed that the national level entrance exam would be conducted in a single day this year, a departure from the trend of multi-day testing window adopted since the inception of computer-based testing of the national level entrance exam.

CAT 2015 to be conducted in single day, says Convenor

In an exclusive interview with Dr. Tathagata Bandyopadhyay, CAT 2015 Convenor, CAT 2015 will be held in a single day across 2 slots. The exam pattern is also expected to undergo major changes in order to make it easier for the non engineering students.

CAT 2015 Notification to be released on July 26

IIM Ahmedabad, the exam conducting body shares that the official notification of CAT 2015 will be announced on Sunday, July 26, 2015 in the national dailies. The details regarding exam date, application window, result and exam pattern will be announced on the said date.

IIM A professor Dr. Tathagata Bandyopadhyay to be CAT 2015 Convenor

Dr. Tathagata Bandyopadhyay, faculty member of IIM Ahmedabad has been appointed as the CAT 2015 Convenor. He is the faculty of Production and Quantitative Methods at IIM Ahmedabad.