CAT 2015 - Common Admission Test or CAT is the most competitive MBA entrance exam of India taken by around 2 lakh candidates each year. Conducted by the Indian Institutes of Management, CAT is the most popular entrance exam for the admission to 19 IIMs and around 100 B-schools across India. CAT 2015 surprised the management fraternity with 2,18,664 registrations, the highest number in past 5 years. However, the actual number of test takers was 1,79,602. The result has been declared on January 8, 2016, through a text message from the domain name of DM-IIMCAT stating the overall percentile of the test taker. The score-cards were available on the official website by the end of the day."We will announce the section-wise score-cards with all details which candidates will be able to access by the end of the day today (January 8)," the officials said after the candidates were sent the SMS in the afternoon. 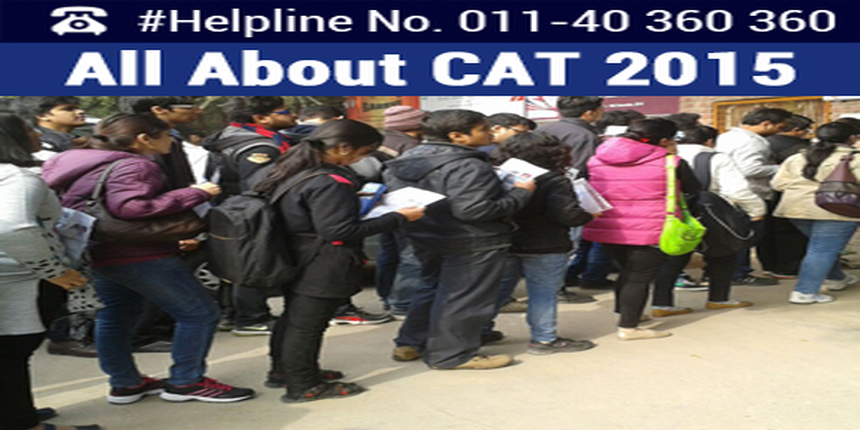 CAT 2015 was conducted by IIM Ahmedabad for admissions in the management programmes of IIMs on November 29, 2016. The total number of seats for the 13 IIMs was 3335. With the commencement of 6 new IIMs in Nagpur, Visakhapatnam, Sirmaur, Amritsar, Sambalpur and Bodh Gaya, the total number of seats have further increased. With the average intake being 60, the approximate seats is 3695.

CAT 2015 had undergone massive changes in terms of pattern, schedule and test window.  Unlike the previous multiple day test, CAT 2015 was held in a single day window in 2 sessions. The CAT 2015 application process had started from August 6 and continued till September 25, 2015. The exam was conducted in two sessions (forenoon and afternoon) on Sunday, November 29. The candidates could download the admit card from October 25, 2015. The result will be announced in the second week of January, 2016.

This year CAT has undergone many changes in its exam pattern, which was also hinted by the officials in their notifications earlier. CAT had three sections with a total of 100 questions to be answered within 180 minutes. Candidates were not allowed to switch from one section to another and they were allowed exactly 60 minutes to attempt one section. The CAT 2015 Mock Test explaining the CAT exam pattern had been released by the officials on October 29, 2015. Earlier the mock was scheduled to be released on October 15, but was delayed by almost 2 weeks.

Despite the low turnout of 1,38,000 registrations till September 18, the total number of registrations stood at 2,18,664, after the 5 days extended registration window. This allayed the speculations of the MBA slowdown. CAT 2014 had witnessed a marginal increase in numbers owing to the 1 day extend application window. This was, however, in contrast to the trend where CAT registrations were dipping consistently barring a few occasions. The number of CAT 2013 registration had already dipped to a record low  with only 1.95 lakh candidates filling application for the exam in 2013 as compared to 2.14 lakh applicants in 2012. 00

Despite the registration number growing, over 39,000 candidates skipped the test, among which 84% candidates were non-engineers, failing the main motive behind the pattern change, to bring more academic diversity.

The following table brings to you last year's statistics.

CAT 2015 Convenor Prof. Tathagata Bandyopadhyay's prediction of the CAT 2015 registration numbers to go up owing to the increase in number of IIMs 19 has come true. However, the gap between the number of applications and actual number of test takers is over 18%. Among the 2,18,664 applications, 1,49,408 are male candidates, 69,176 are female candidates and 80 transgender candidates have applied.

As per the numbers shared by the CAT 2015 Convenor Prof. Tathagata Bandyopadhyay, 1,21,291 candidates were male and 58,270 candidates were female out of 1,49,488 and 69,176 registrations respectively.  Around 50% of the registered transgender candidates had appeared for the test, numbering to 41 out of 80.

Analyze your Preparation for CAT and get a detailed Improvement Plan. Click Here

At the time of registration, the candidates had to select any four Test Cities as per their preference from the drop down menu. Candidates were allotted one among the 4 preferred Cities in any 1 of the 2 sessions after the last date of registration. Exam shift (forenoon or afternoon) will be allocated for each registered candidate based on the city preference made at the time of application. Candidates could not select their exam shifts as it was allocated automatically to them.

CAT 2015 Admit Card: The Admit Card could be downloaded by the registered candidates from October 25, 2015 from the official website of CAT 2015. The Admit Card download schedule was postponed by 10 days from the original date of October 15. At the time of the exam, candidates had to submit their admit cards. Download it again for the next steps of admission.

CAT 2015 Exam Pattern: CAT is a computer based objective type test with multiple choice questions. The new CAT Exam Pattern is explained below,

The total duration of the exam is 180 minutes with exact 60 minutes to answer each section. The total number of questions is 100, divided into three sections. The three sections will be, Quantitative Aptitude (QA), Data Interpretation & Logical Reasoning (DILR) and Verbal and Reading Comprehension (VRC), in that order. Candidates will not be allowed to switch from one section to another while answering questions in a section.

QA and VRC will have 34 questions each, and DILR will have 32 questions. Some questions in each section may not be of multiple choice type, instead, candidates have to type direct answers on the screen.  Candidates will not have the liberty to attempt any of the sections first, rather, they must answer the sections in a pre-specified order, as per the officials, which will be same for all the candidates. The number of Non-MCQs in each section  varies and are not disclosed by the officials.

One of the major changes, and also first time in the history of CAT, candidates will be allowed to use basic on-screen calculator for calculation. The tutorial, explaining the CAT 2015 Exam Pattern has been launched on October 29, 2015, for the candidates to have a better understanding of the changed pattern, and the procedures to be followed at the time of CAT 2015 exam.

CAT 2015 Selection Process: The candidates are first shortlisted by IIMs and other participating B-schools on the basis of CAT cut off scores, followed by Personal Interview (PI) and Written Ability Test (WAT)/GD. The B-schools conduct separate selection process, apart from the 6 new IIMs. List of shortlisted candidates for the next level of selection will be vailable on the individual IIM websites. Each IIM would send interview letters to the short listed candidates directly. The short listing criteria varie from IIM to IIM.

Since last 3 years, the 6 new IIMs- Kashipur, Raipur, Ranchi, Rohtak, Trichy and Udaipur are conducting Common Admission Process (CAP) for the final admission through WAT and PI. However, the final admission offers are made on the basis of the institute specific admission criteria.

CAT 2015 Result: The CAT 2015 Result has been declared by on January 8, 2016 via text messages in the afternoon. The score cards were available at the website after 6 PM of the same day.

CAT 2015 participating institutes: 19 IIMs of India and over 100 B-schools across the country.

CAT 2020 - Get all details of CAT 2020 such as notification, exam date, registration, eligibility...

Group Discussion For MBA - Know about the importance of GD, areas which are focused on GD, GD top...

As per the details provided, you have decent academic record and its really good that you have 2 years of work experience. It'll give you an edge in selection process. Also, if you belong to general category, then to get a call from IIM A,B,C you should focus on getting a minimum of 98 percentile in cat.

Prepare for the syllabus according to the weight age of each section.  Give mock tests and improve upon your timing skills. if you join a coaching class it would be good as you will get a clearer idea.

why these exams are conducting

CAT is commencing on 25th November in 2020. So it does not need to get postponed/cancel due to corona virus. The situation should get better till November. So, we can't argue why CAT is conducting.

Please elaborate your query and provide more details so that we can help you better!!

Can i apply for MBA at JK Lakhmipat University if i have not given CAT?

Yes ,you can apply at JK Lakhmipat University if you have not given CAT , because as per their eligibility criteria for getting admission their the candidates must have appeared in CAT/MAT/ATMA/XAT/CMAT or any other national level entrance test.

In case the candidate has not appeared for any of the mentioned tests, they will have to appear in the JKLU Management Entrance Test (MET) to qualify for the programme.

So, you can apply there by appearing in their Entrance test.

What is the CAT exam pattern ?

CAT ( Common admission test) is a very reputed entrance exam conducted by the Indian Institute of Management (IIM) for admissions into various colleges for MBA. The duration of the exam is 3 hours for all the categories and 4 hours for the PwD category. The sectional duration for each section is 60 minutes each whereas it is 80 minutes for the candidates of the PwD category.

The total number of questions asked in the entrance exam are 100. It is a computer based examination.

Candidates lose 1 mark for each incorrect answer and gain 3 marks for every correct answer. No marks are deducted for the questions which the candidate didn't attempt.

The examination consists of 3 sections namely - Quantitative ability , Data interpretation & logical reasoning and Verbal ability and reading comprehension. These sections consists of 34,32 and 34 questions each respectively.

These were some of the main points to be kept in mind for the CAT exam.

Further you can go through this link to know everything about CAT exam. https://www.google.com/amp/s/bschool.careers360.com/articles/cat-exam-pattern/amp

Hope it helps! All the very best for your future endeavours!