Neha Manglik can now be referred to as serial topper as she tops yet another prestigious MBA entrance exam, XAT 2015. The Delhi girl secured 99.99 percentile in XAT 2015 and is the Rank 1 holder for the exam conducted by XLRI Jamshedpur. Neha is already a well known name now in the MBA aspirants circle for being one of the 16 100-percentilers in CAT 2014 and the only girl to top the most competitive MBA entrance exam since 2009. 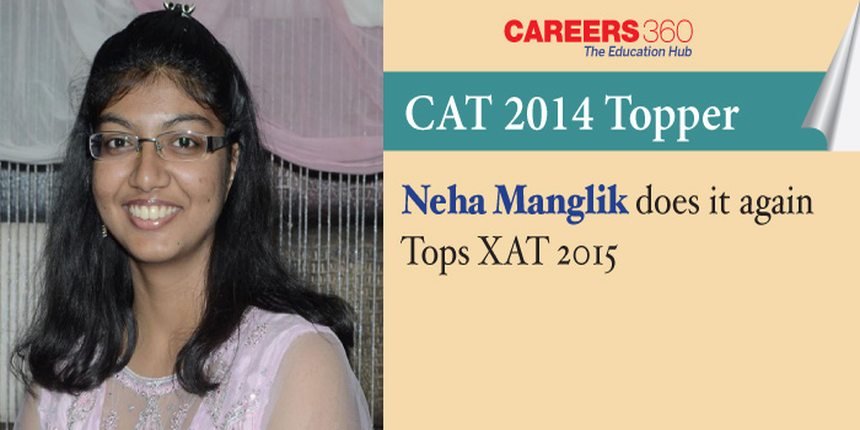 Neha, a Chemical Engineering student from BITS Pilani had earlier topped CMAT September 2014 by securing 99.99 percentile and 5th All India Rank. Neha has been a consistent success story since her 10th exam, which she topped in her school with 96%.

In her interview with Careers360, she mentioned, “MBA is not always just finance. It teaches management principles, which are useful to manage every part of your life. Pursuing MBA has always been a dream. Also, in BITS, I took up electives like Principles of Management, Human Resource Development and I realised I wanted to know more about these topics. This gave me another reason to do an MBA.”

Speaking about her preparation strategy, she says, “For the last six months, I focused on giving mocks and analysing areas in which I could improve. There was no fixed schedule or routine; I gave time to preparation based on what was required and what was available.”

Dr. Munish Thakur, XAT 2015 Convenor mentioned, “Neha Manglik, a candidate from New Delhi has obtained the first rank by securing 99.99 percentile. Among the highest scoring candidates, 21% are girls. As per the XAT 2015 system, candidates are not placed in the 100 percentile bracket.”

Stay tuned to bschool.careers360.com for more on XAT 2015

Current Affairs for MBA Exam-Know the details related to the c...

XAT 2022 Preparation Tips from Toppers - Know how to prepare f...

Best Books for XAT 2022 Preparation - Books are agreeably the ...

How to Prepare for XAT 2022 While Working?

As you have mentioned that you have got 91.6% in 10th and 75.2% in 12th and taking into consideration that you have secured 99.7 percentile in cat so let me tell you it's a very good percentile to grab iims.

So, because of your 12th percentage there will be a certain disadvantages because it has its own weightage. But you stand fair chances for NITIE ,xlri, iim Kozhikode and some lower iims and lastly also symbiosis.

is there any chance of going out of India after doing marine logistics?

Marine logistics play an important role in international trade and commerce. Almost of the trade through sea route which always increases the need of professionals in this field. There is a wide range of scope in logistics and shipping.

After completing your degree, you can join government/ private shipping companies and various port agencies in India or in abroad. Shipping industries are one of the best sectors to make your career in India and abroad which will itself provide opportunities to go out for work.

Hope this answers your question.

how can i give free mock test? for CAT and for XAT

The official CAT 2021 sample test will be released by IIM Ahmedabad in the first week of November 2021. Candidates can take the CAT online practise exam after it is posted on the CAT's official website. Those studying for the CAT 2021 exam can take the CAT mock tests to improve their percentile score.

Also for careers 360 test series go through the given article

Similarly XAT mock test will be updated in it's official website.

For XAT sample paper use the following link

similarity in syllabus of tissnet/tissmat,XAT and CAT? can preparation of one help to clear others too?

I AM ASPIRANT, I LIKE TO CRACK NEXT YEAR TISSNET BUT I DONT KNOW ANYTHING ABOUT IT.

BUT I BELIFE MY OWNSELF UNDER YOU GUIDANCE I ACHIEVE........MY DREAM