CAT 2014 to be conducted by IIM Indore; TCS to be the next conducting agency 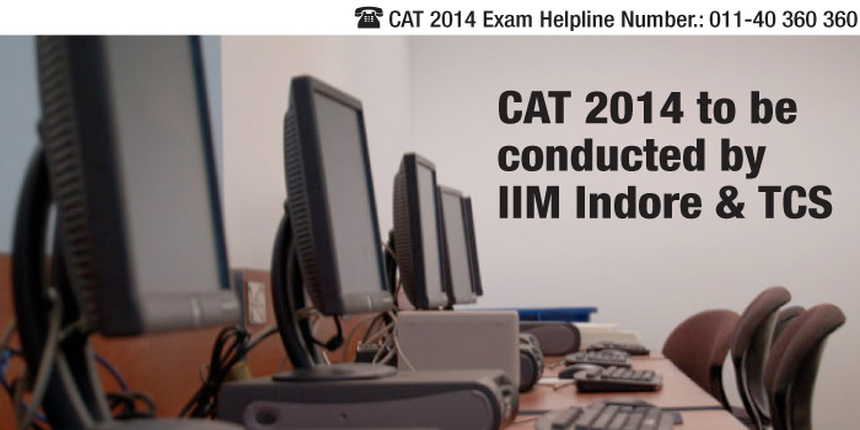 Prof. Kapoor also confirmed that Tata Consultancy Services (TCS) would be the agency which will conduct the computer based CAT 2014. Prometric was the erstwhile agency, which had the 5 year contract with IIMs to conduct the computer based CAT since 2009. Commenting on this development, Prof. Kapoor said, “We look forward to the association with TCS for the next 5 years. We aim to make CAT a hurdle free experience for the test takers.”

Analyze your Preparation for CAT and get a detailed Improvement Plan . Click Here

Every year, the conducting IIM for CAT is assigned in a rotational manner. This is a first in the history of the Common Admission Test (CAT) that an IIM is the conducting body for 2 consecutive years. Commenting on this development, Prof. Kapoor mentioned, “This was a collective decision taken by the 6 IIMs including IIM Ahmedabad, Bangalore, Calcutta, Lucknow, Indore and Kozhikode. Last year Prometric’s contract ended and this year it would be a new start with a new agency, hence the IIMs decided that it would be best for IIM Indore to continue this year as well.”

Post the declaration of the CAT 2013 result, controversy ensued over the scoring and normalization process after 95,000 candidates obtained 0 or negative scores, as a result of which as candidates who attempted no questions were placed at around 55 percentile bracket. Several CAT 2013 candidates filed Writ Petition which led the Indore High Court to send notice to all 13 IIMs, Ministry of HRD and CAT testing agency Prometric India Pvt. Ltd.

CAT is a computer based objective type and multiple choice question exam of 170 minutes duration. It has 2 sections of 50 questions each. The sections are Quantitative Ability & Data Interpretation and Verbal Ability & Logical Reasoning. For every correct answer, there are 4 marks but for each wrong answer, 1 mark would be deducted.

The scores of CAT are considered for admission in 19 IIMs and over 150 B-schools across India.

Stay tuned to bschool.careers360.com for more news and updates on CAT 2104.

Things you must not do during GD & PI round

Things You Must Not Do During GD & PI Round - Know why GD PI is conducted? What not to do in GD/P...

CAT Cutoff 2019 – The CAT 2019 Cutoff refers to the minimum percentile a test taker must obtain i...

Hello Aspirant,
You can go for following institute based on your Cat and MAT score::

Is CAT /MAT rank card required at the time of placement ?

Hello aspirant,
I'll like to tell you that your CAT/MAT scorecard is required only at the time of admission process. Once you are enrolled in a college then you do not need your cat/mat scorecard. However you can secure a copy for reference for yourself. But you'll not require it at the time of placement.
All the best
Read More
Answer
Answer Later
Report
47 Views

I am not good in VARC section. how will I improve.

Swapnil, VARC section of the CAT is regarded as one of the most scoring sections of the exam but at the same time, it requires a lot of practice, attention and concentration to choose the correct option or to comprehend the text accurately. Here are a few measures which you can take to improve your scores in VARC section:-

READ NEWSPAPERS DAILY as it not only prepares you for the WAT and GD/PI but also improves your vocabulary.

READ A LOT OF NOVELS, preferably FICTIONS as it improves your reading speed and helps you in understanding part of the long texts also

TRY TO BUILD AN ABILITY TO WRITE OR PREDICT THE ANSWERS even if you cannot understand the passage properly, which may help you in the TITAs

TRY TO SOLVE A LOT OF MOCKS AS VARC SECTION IS A SECTION WHICH DESERVES A LOT OF PRACTICE apart from your understanding of text,of course

GO THROUGH THE PREVIOUS YEAR PAPERS AS WELL AND TRY TO UNDERSTAND THE TYPES OF QUESTIONS ASKED IN VARC.
Read More
Answer
Answer Later
Report