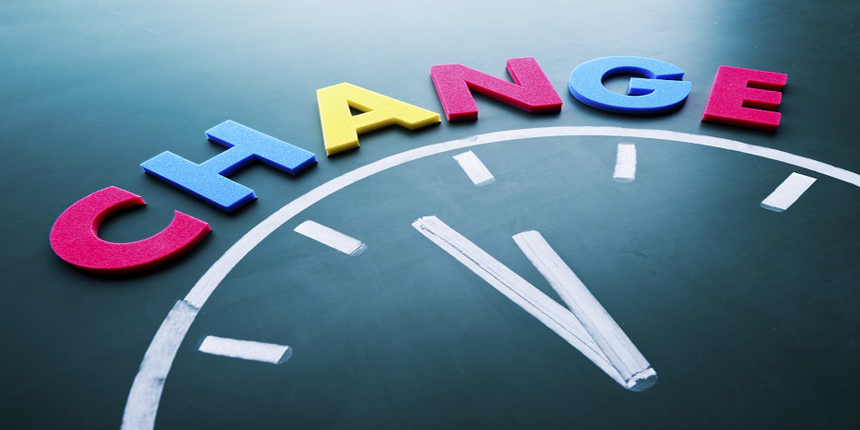 So the CAT is out of the bag and it has brought along many changes which you have to get used to before going for the test, or even before you fill up the CAT 2014 application form. Just when you think that you have figured out everything about CAT and there can be no more change, IIMs throw snowball of surprises at you. As we were saying, the CAT 2014 notification on Sunday, July 27, 2014 has brought with it several changes in order to make the test more aspirant friendly. With Tata Consultancy Services (TCS) roping in as the new online testing partner, changes were not entirely unexpected too. This article of Careers360 gives you the list of changes which you must keep in mind if you have decided to take CAT 2014.

Analyze your Preparation for CAT and get a detailed Improvement Plan . Click Here

The following table will give you the changes in nutshell.

More questions to answer but no more sectional boundaries

In 2011 when the CAT exam pattern was last changed, it was announced that there would be 2 sections instead of 4 and they would be time bound so that the test takers can devote the entire duration in solving a particular section. Most of the candidates did not like it as they wanted freedom to choose which section to start with and to move between sections. Well, good news is that the sections are no more time bound. Candidates can start with either of the section and move to and fro within them. The bad news is, if you have started preparing accordingly, your strategy needs to change now. CAT 2014 would more be an exam to test your focus and concentration than your Quant and Verbal skills.

Moreover, the number of questions has been increased from 60 to 100. Each section will carry 50 questions. The duration of the test has also increased by half an hour. Instead of 140 minutes, you now have 170 minutes to attempt the paper. So approximately you get 1.5 minutes to solve a question. Time would be a constraint here. Though you would not be attempting all the questions anyway, you must pay heed in choosing the right questions in order to not waste time over wrongly chosen questions. Also, since there would be no sectional time limit, the threat of skewed performance also comes into question.

The following table will help you understand better.

In the next few months, prepare a fool proof strategy and adapt yourself to cope with these challenges.

Since 2009, when CAT became computer based from the traditional paper pencil format, the test was conducted over a window of 20 days starting in October and ending in November. According to the CAT 2014 notification, the exam is scheduled for 2 days within a week, which are Sunday, November 16, 2014 and Saturday, November 22, 2014. However, the number of slots has increased from 2 to 4 in a day. Instead of day wise reports of CAT 2014, you would probably look for slot by slot report. Though you won’t be able to choose your own exam date, you are definitely rescued for the anxiety you would have face after each CAT exam day for an entire month! Hopefully a shorter test duration would reduce the chances of glitches and discrepancies as well.

Confused about choosing the date? Leave it on the exam authorities

If you have taken CAT earlier, you must have faced the dilemma about which date to choose for taking CAT. Whether to choose an early date and get over with it or choose the later date and get more time to prepare were the main questions every CAT applicant had in mind in the ‘Schedule your test’ option. From now on, you just have to choose 3 preferred test locations and the date and slot will be assigned to you by the exam authorities. While you are saved from the dilemma, your liberty to choose the test venue, date and slot as per your convenience is also marred now.

Though the online sale of CAT Voucher was introduced last year only, the option to buy it from the select Axis Bank branches existed too. This year onwards, the application process for CAT 2014 is completely online. The CAT voucher has to be bought from the official website of CAT 2014 through Credit Card, Debit Card or Net Banking. The application fee is same as last year, Rs. 1600 for General and NC-OBC category candidates and Rs. 800 for SC, ST and PWD (DA) candidates. The application process will be conducted for 56 days, From Wednesday, August 6, 2014 to Tuesday, September 30, 2014.

Download the CAT 2014 Admit Card, don’t expect it in your mailbox

After the completion of the application process, there would be no notification as ‘You’ve Got Mail’ with your CAT Admit Card. You will have to wait till Thursday, October 16, 2014 to download your Admit Card from the exam website and know your test center, date and slot. The CAT 2014 Admit Card will not be sent to you in either hard or soft copy. You would have to download it before your test date.

More test centers to accommodate the exam over 2 days

While last year the CAT 2013 was conducted in 40 cities across India in 75 test centers, CAT 2014 test centers would be more than double. According to IIM Indore, the test will be held across 99 cities in India consisting of 354 test centers. Candidates are likely to get a convenient test location so that they get more time to focus on the test than plan the travel arrangement for reaching the test venue.

CAT 2014 result – Earlier than you had expected

As per the past years’ trend, the CAT result is declared in next year January. The notification has specified that CAT 2014 result for this year’s CAT would be declared by the third week of December 2014. Hence, it is expected that the admission process at IIMs and other top B-schools would be earlier than the usual schedule.

Stay tuned to bschool.careers360.com for more news and updates on CAT 2014.

MY NEET PG 2020 rank is 9590. I am general cat student. Is there any possibility of getting a Derma seat at this rank?

I would like to tell you that you might get a seat and there are chances but obviously more chances would be if you participate in state quota counseling and choose dermatology there as your field of study in any one of your state government medical college.

I hope my answer helps.

The best coaching centres for CAT are as follows (it will be better if you specify your city requirement as every tier 1 city has good coaching centers for CAT):

my air is 6348 gen cat.Can i get MS obg in Andhra Govt colleges.

Going by previous All India cut offs and your rank, you may decent chances in Medical Colleges like:

Obstetrics and Gynaecology is tad difficult with this rank. Having said that, this is 2019 data and cut offs change every year depending on various factors such as no.of Candidates appearing for the exam, no.of Candidates qualified, difficulty of the exam, and no.of seats available for each specialisation. Please try our College predictor to check the possibility of other specialisations with you rank across India:  https://medicine.careers360.com/neet-pg-all-india-college-predictor

my rank in neet Pg 2020 general cat 32k nd in OBC it is 11k is there any chance of getting clinical subject in gov. colleges?

First of all congratulations on securing average rank in NEET PG 2020. As per your rank and previous year cutoff, you will get private colleges with this rank. The colleges you will get in clinical branch are:

There is a list of medical you will get as per your rank. Hope this helps!! You can also go through our college predictor link: https://medicine.careers360.com/neet-pg-college-predictor

Hi aspirant,
IIMs are known to raise their bars of the expected percentile in the examination. The general bracket of the accepted CAT percentile ranges from 95 to a 99.98 percentile so as to get you a PI, that is, a Personal Interview call from the IIM institutes. In regard to this they also consider 12 and 10 class marks and grade them. With your score you have fair chances of getting a call from IIM ahemdabad but you have to clear analytical written test (AWT) and personal interview for admission. Follow this link for more details-
https://bschool.careers360.com/articles/iim-ahmedabad-cutoff/amp
Hope this helps.
Read More
Answer
Answer Later
Report